Chinese President Xi Jinping’s muscular speech to the Boao Forum Asia annual conference was clearly designed to send a signal to the United States that China regarded the change of administration as an opportunity for a renewed dialogue on contentious issues.

Xi did not take a backward step in his remarks[1], which emphasised a shifting international power balance. He avoided directly naming the US in his relatively brief address opening the forum, but America was clearly in his sights.

He wants the Biden administration, and the international community for that matter, to accept China not only as an emerging superpower but also as an equal in addressing global challenges.

In a telling statement, Xi said:

Global governance should reflect the evolving political and economic landscape.

This is shorthand for saying that because of its growing weight economically and militarily, China expects to be given its due.

The title of Xi’s speech, Pulling Together Through Adversity and Toward a Shared Future for All[2], was clearly designed to emphasise China’s global leadership aspirations.

Xi did not make specific reference to widening criticism[3] of China’s human rights abuses in its Xinjiang region, its interference in Hong Kong[4] in contravention of its undertakings to the UK, its pressure on Taiwan[5], and its assertiveness in the South China Sea[6].

However, building international displeasure on all these issues formed a backdrop for a speech that warned against countries “bossing others around”. This was a clear reference to the US at the head of a global coalition increasingly exercised about China’s provocative behaviour.

Xi also spoke of the dangers of “decoupling” global economies. He called for greater global integration.

His speech to the Boao forum is more than usually significant this year. It marks an important statement by a Chinese leader early in a US administration, and also comes just days before a climate summit[8] to be hosted by US President Joe Biden.

Xi will participate in the summit along with other world leaders, including Russia’s Vladimir Putin.

The Biden multilateral climate summit could hardly represent a sharper contrast with the “America First” policies of the previous Trump administration.

On the face of it, this is a positive development.

Significantly, Xi devoted a section of his speech to climate issues.

We will build a closer partnership for green development. We will strengthen cooperation on green infrastructure, green energy, and green finance.

Xi’s reference to a green agenda comes days after the US and China resolved to fight climate change[9] “with the seriousness and urgency that it demands.’’

The Shanghai climate accord[10], ill-defined though it might be, represents the most positive development in Sino-US relations since the Obama administration left office in 2017. At the very least, it indicates a willingness by Beijing and Washington to work together on issues that require global coordination.

Biden has made it clear he will press for more ambitious greenhouse gas emission targets[11]. He is expected to allude to these at the climate summit that will be held virtually. 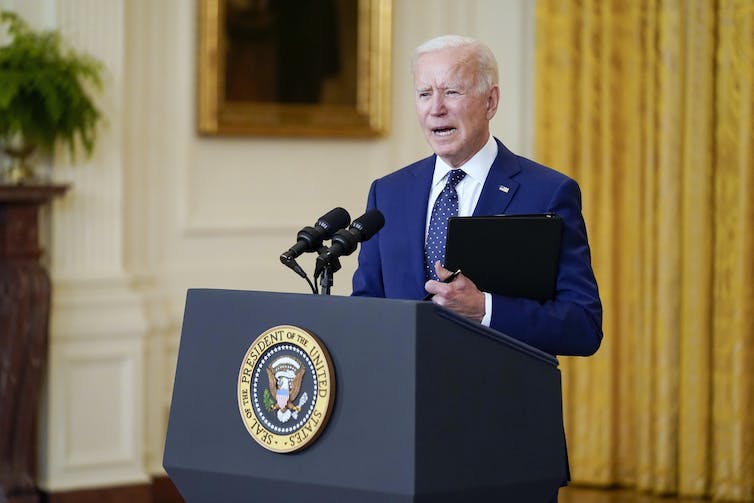 US President Joe Biden has made action on climate change a central policy of his administration. Xi has indicated he wants China to be equal partners in that. AAP/AP/Andrew Harnik

Xi’s choice of the Boao Forum for a keynote enabled him to set the stage, from China’s perspective, for his participation in the Biden event, given expectations the US will seek to reassert a global leadership role.

The Boao forum has evolved since it was first held on Hainan Island 20 years ago, to the point now where it is described as the "Asian Davos”.

This is a reference to the World Economic Forum gathering held in the Swiss town of Davos each year, to which political and business leaders gravitate.

The Chinese version is important in the sense Beijing regards it as a counterweight to Davos, which is dominated by Americans and Europeans.

The forum this year has some 2,000 participants. The heads of the International Monetary Fund and the United Nations addressed it by video link.

Read more: Australia has a great chance to engage in trade diplomacy with China, and it must take it[12]

The convening of the forum, after it was cancelled last year due to the pandemic, and amid tensions surrounding the US-China relationship, give the event added significance. The number of high-level attendees underscores the complexities of China’s fractious relationship with the rest of the world.

The world might want to distance itself, given disquiet about China’s various provocations. But the international community can hardly ignore economic realities. China, whose economy is on fire[14] with growth rates in double digits, is contributing about one-third to global growth.