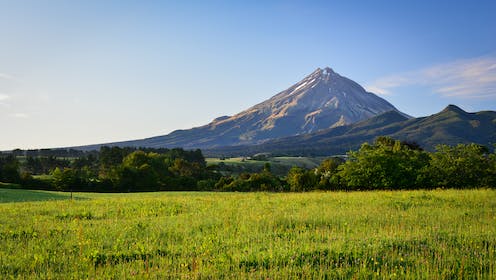 Not I, some child born in a marvellous year / Will learn the trick of standing upright here.

The final couplet in Alan Curnow’s poem “The Skeleton of the Great Moa in the Canterbury Museum, Christchurch” can be read in many ways. One is to see in it a gloomy acceptance of the impossibility of finding one’s place in another people’s land. Another is to find in Curnow’s words a bolshy refusal to even attempt the act at all.

But to remain resolutely non-upright, it seems to me, would require the awkward meshing of memories of some other land in which (once upon an earlier time) one did stand upright, with a sort of historical amnesia regarding the place in which it now seems so difficult to find one’s feet.

Here are some things about the land on which my people established themselves in Aotearoa that were, for a long time, forgotten.

My great-grandfather, Andrew Gilhooly, was one of the 644 members of the Armed Constabulary (AC) that invaded Parihaka[1] on the morning of November 5 1881. He was there for the weeks and months that followed, during which women were raped, whare[2] were torn down, crops destroyed and people’s possessions and treasures looted.

Parihaka is not just an invasion day story, and Andrew remained at Parihaka as part of an occupying force until the end of 1884. The occupation was not benign. On April 17 1882, for instance, the AC broke up an attempt by non-Parihaka Māori to distribute food at the pā. The parliamentary record has Native Minister John Bryce finding the idea of Māori taking supplies to Parihaka to be “in every way objectionable”.

Read more: From Parihaka to He Puapua: it’s time Pākehā New Zealanders faced their personal connections to the past[3]

And so, in retaliation for “this act of antagonism to the expressed orders of the Government” – in other words, to punish people whose gardens have been destroyed and whose stock have been stolen for having had the temerity to try to feed themselves – the AC pulled down a dozen more whare.

Andrew returned to the coast a decade or so after he left, this time to become a farmer. He and his wife Kate would eventually control three family farms. All were within a couple of kilometres of Parihaka and each part of the 1,275,000 acres of land confiscated from mana whenua[4] by the colonial government under the provisions of the New Zealand Settlements Act[5] and then granted to soldiers or sold to people like my great-grandparents.

An 1880s illustration of the village at Parihaka, sitting beneath Mt Taranaki. GettyImages

Andrew obtained title to the first farm – section 44, Block 12 of the Cape Survey District (CSD) – in 1895. It was on the seaward side of the South Road (he had participated in its construction when he was with the AC) and was therefore available for freehold purchase.

Had the road been further to the west, as originally surveyed, he might not have been able to buy the property, because it would have been part of the land on the mountain side of the road that was initially set aside for Māori reserves. But a surveying error meant the South Road wound up being closer to Taranaki maunga than it should have been, freeing up 5,000 additional acres for freehold sale – including section 44.

Read more: Separatist or radically inclusive? What NZ’s He Puapua report really says about the Declaration on the Rights of Indigenous Peoples[6]

My great-grandmother, Kate, purchased the third of the Gilhooly farms in 1921. Section 102, Block 12 of the CSD, which the Native Land Court named “Parihaka A”, was on the mountain side of the road but was not leasehold land. It did, however, contain an urupā[7]. No-one seems to know whose people lay in it, or whether or not it still exists.

Furthermore, Parihaka A was part of the 5,000 acres of land the colonial government decided, in 1882, to hold back from any future Māori reserves as “an indemnity for the loss sustained by the government in suppressing the Parihaka sedition”.

The sedition, to be clear, that was non-violent and whose protagonists welcomed my great-grandfather and his AC comrades into the pā with gifts of food. (And for a time the food kept coming: on New Year’s Day 1882, mere weeks after their pā had been destroyed, the people of Parihaka prepared a hangi for members of the occupying force.)

But it is the second farm that I want to talk about here, because that was on Māori leasehold land.

Locked out of their own land

The history of the West Coast leasehold system[9] is, I suspect, even less well understood than that of the invasion and plunder of Parihaka. Briefly, in 1882 the government began restoring to Māori some of the land it had confiscated 20 years earlier.

Puke Ariki, CC BY-ND[10][11] Bizarrely, however, responsibility for the administration of these West Coast reserves was vested not with the Māori owners but in the hands of a government-appointed public trustee, who was tasked with acting for the benefit of “the natives to whom such reserves belong” and for “the promotion of settlement”. Those two requirements are, of course, fundamentally incompatible, and it was the second that won out. By 1912 some 193,996 acres had been notionally set aside in reserves in Taranaki, but 120,110 of them had already been leased to settlers by the trustee via 21-year leases. And these were no ordinary leases. From 1887 they could be renegotiated without the approval of the land’s owners, and from 1892 they came with a perpetual right of renewal, effectively (and quite literally) locking Māori out of their own land. Read more: Can colonialism be reversed? The UN's Declaration on the Rights of Indigenous Peoples provides some answers[12] There is more, as there always is with such things. Quite apart from enjoying security of tenure, leaseholders could also mortgage, sublet or transfer a lease to others – without the permission of the land’s owners. Under the Government Advances to Settlers Act[13] 1894, Pākehā settlers could borrow money from the government to improve the land – but Māori landowners could not (the clue is in the title of the act). Māori were forbidden from negotiating leases, and the trustee systematically set rents at lower rates than would have been secured on an open market. After 1892, the trustee could also charge Māori to live on what remained of their own land. Some Māori owners paid more for these occupation licences than some Pākehā farmers paid to lease Māori land, which led to people who owned land they could not live on sometimes finding themselves in debt.

Kate Gilhooly. Author provided This was land owned by Māori but controlled by the state, which was leased out at rates decided through a process the owners could play no part in, and which incurred debt over which those owners had little or no control, in part because they could not live on and work their own land. It is difficult – impossible, really – to imagine such a regime being applied to Pākehā landowners. My family were beneficiaries of that system. In 1902, my great-grandfather signed the lease on a farm on the Opourapa Road for £35. The lease was renewed 21 years later, at which point its value increased to £47. By the time the second leasehold period had elapsed the Māori owners of the land – of whom there is no mention in any of the archival material I have found – had endured a 42-year period during which the return on land that had been leased in perpetuity to someone else had grown by just £12. The trick of standing upright here Historian Vincent O’Malley has also pondered[14] Curnow’s “trick” to standing upright in Aotearoa: I would suggest a big part of it is reconciling ourselves with the history of this country. Not the imagined history of a plucky wee nation at the bottom of the globe, punching above its weight, egalitarian and forward-looking. I’m talking about the messy, complicated history of how Pākehā colonised this land. For the better part of my life I have managed to avoid attempting this trick, much preferring both the orthodox settler story of thrusting progress and a personal history that began with the purchase of the family farms. Lately, though, I have found myself trying to take O’Malley up on his suggestion, grubbing around in the archives, old cadastral maps and AC annual reports in an attempt to end the forgetting by putting together a more honest, less selective and self-serving historical narrative. The story that is emerging is a very un-settling one. Things are still feeling a bit shaky, but I’m slowly getting better at standing on my own two feet here. Richard Shaw’s The Forgotten Coast[15] is published by Massey University Press. References^ Parihaka (nzhistory.govt.nz)^ whare (maoridictionary.co.nz)^ From Parihaka to He Puapua: it’s time Pākehā New Zealanders faced their personal connections to the past (theconversation.com)^ mana whenua (maoridictionary.co.nz)^ New Zealand Settlements Act (thespinoff.co.nz)^ Separatist or radically inclusive? What NZ’s He Puapua report really says about the Declaration on the Rights of Indigenous Peoples (theconversation.com)^ urupā (maoridictionary.co.nz)^ CC BY-NC (creativecommons.org)^ West Coast leasehold system (taranaki.iwi.nz)^ Puke Ariki (pukeariki.com)^ CC BY-ND (creativecommons.org)^ Can colonialism be reversed? The UN's Declaration on the Rights of Indigenous Peoples provides some answers (theconversation.com)^ Government Advances to Settlers Act (nzlii.org)^ pondered (www.meetingplace.nz)^ The Forgotten Coast (www.masseypress.ac.nz)