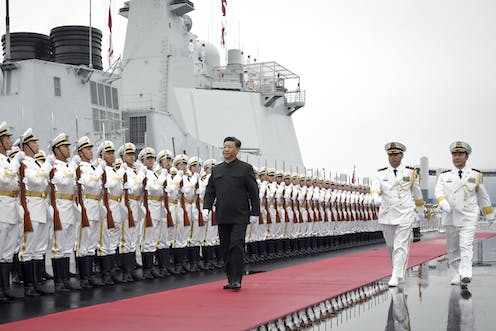 How can Australia navigate the tough and dangerous strategic environment in Asia today with America and China competing to be the leading regional power? The consensus in Canberra – on both sides of politics – is that we should stick as close as we can to America, in the hope it will win the contest.

But the choice is not that simple. We can see why when we look at a couple of incidents on the same day in late May.

In two widely separated locations, Chinese fighters intercepted maritime patrol aircraft – Australian and Canadian respectively – in the Western Pacific. Both were undertaking routine surveillance operations in international waters close to Chinese-claimed territory. China has long been touchy about US and allied maritime surveillance operations close to its shores, and it frequently warns them off.

But this might be more than routine Chinese belligerence. It could be the start of a new campaign to turn up the military pressure on America’s leadership in Asia by eroding the credibility of its regional strategic posture and alliances – and it would put Australia right in the firing line.

It is a fair bet that eventually China will bring its challenge to America to a head in a military confrontation over Taiwan. But that might not be its next move. It would make sense for China to look for other opportunities to test America’s resolve and undermine its credibility before risking that ultimate showdown. Targeting the maritime surveillance operations of US allies in waters around China’s coasts would seem an obvious and effective way to do this.

Let’s look at it from Australia’s perspective. China could simply undertake increasingly frequent and aggressive interceptions of Australian regular maritime patrol flights over the South China Sea, creating real concerns about the safety of our aircraft and crews. We would begin to fear the Chinese might force one of our aircraft to land, or that a mishap would lead to a crash.

Australia would be left with a very difficult choice. We’d have to decide either to abandon the operations or reinforce them by sending our own fighters to escort our maritime patrol planes.

The second of those options would be difficult, expensive and dangerous. It would be difficult and expensive because using short-range fighters to escort long-range patrol aircraft would require a massive commitment of resources. And it would be dangerous because confrontations between our fighters and Chinese intercepting aircraft could lead to an air-to-air battle that could swiftly escalate into full-scale war.

But the alternative – abandoning the operations – would be a very significant step with big strategic consequences. It would be seen as conceding important principles of international law by allowing China to compel us to abandon our clear right to operate in international airspace, and would weaken our defence of the Law of the Sea against the Chinese claims over the South China Sea that we see as plainly illegal. That is not something we should lightly do.

Even bigger stakes are involved. A Chinese campaign of interception and intimidation against Australia’s maritime patrol operations would be a direct challenge to America as well. We would naturally expect Washington to step in and support us by sending its own fighters to escort our maritime patrol planes, and so would America’s other allies and friends in Asia.

Read more: Friday essay: if growing US-China rivalry leads to 'the worst war ever', what should Australia do?[1]

This would not be an easy choice for Washington. Failing to support us would weaken its defence of international law, undermine its credibility as an ally, and vividly demonstrate to all the world how China’s power in the Western Pacific has grown. It would be a major blow to America’s claims to primary strategic power in our region.

But sending US fighters to escort Australian planes over the South China Sea would risk a direct US-China clash that could easily escalate into a full-scale war. It is the same kind of choice America faced ten years ago when China began aggressively occupying and building bases on islands and features in the South China Sea claimed by the Philippines and other US friends and allies.

In that case, Washington decided not to intervene militarily for fear of sparking a confrontation that could lead to war, despite the damage done to US credibility in Asia. Joe Biden would have to think twice about running the same kind of risks today against a China that’s even more assertive and much better armed.

Risky moment: US President Joe Biden at May’s meeting of the Quad countries, Australia, India, Japan and the United States. The Yomiuri Shimbun via AP

These are exactly the kind of choices China’s leaders want to force on America and its allies. They hope and expect that we, and America, will back off. They would thereby show the US and its allies no longer call the shots in East Asia and the Western Pacific, and thus assert their claims to take over regional leadership.

Of course it would be a gamble, because America might not back off. But it is a gamble Beijing might well be willing to take, because they do believe the all-important balance of resolve lies in their favour.

So what should Australia do if China launches an escalating campaign against our maritime surveillance operations? The obvious and instinctive answer is to stand firm and continue the flights in the face of Beijing’s intimidation. But the stakes are too high to act on instinct alone, and the more carefully we think about it, the less clear the choice becomes. What, after all, is really at stake?

Our maritime patrol operations in the South China Sea have no direct significance for Australia’s own defence. We do them primarily to show support for some rules of international law. The rules are important, of course, but are they important enough to justify the risks of a military confrontation with China in its front yard?

Read more: Marles shifts tone on China at defence summit – but the early days of government are easiest[2]

More broadly, we perform those operations to support America as the leading military power in Asia. But do our gestures make much difference to that? Is the US position in Asia going to be sustainable against China’s challenge, given China’s economic, diplomatic and military power has grown so great, and will grow further in the decades ahead?

Stepping back from conducting maritime patrols in the waters close to China may be one of the concessions we will find ourselves choosing to make as we learn to live with the realities of China’s power. It is not what we’d like to do, but it may be better than the alternative, because it makes no sense for us to bet our future on America’s capacity to win a war with China for primacy in East Asia. Quite simply, it is a war America has little chance of winning.