People from different class backgrounds often fall in love in books and on screen — think Sally Rooney’s Normal People, Melina Marchetta’s Looking For Alibrandi, or Arundhati Roy’s The God of Small Things. But this is not just a fictional trope, it happens in real life, too.

Australia is historically thought of as an egalitarian society, which means discussions and representations of class, privilege and inequality[1] are commonly hidden or coded in other language[2].

Our research brings it out into the open, through a study of people who partner with someone from a different class.

What happens when people from different class backgrounds fall in love?

In 2020, we undertook eleven interviews with members of six cross-class couples. For these couples, love across class is an everyday reality and the differences are sometimes subtle, sometimes striking.

These people’s ages ranged from their early 20s to early 60s.

Seven were from a white background, one person identified as Jewish European, one as Vietnamese-Australian, one as Eurasian and one as coming from a mixed-race background. Five couples were heterosexual and one was same-sex.

In Australia, people from different class backgrounds may have grown up within very different family, social and schooling contexts. Class influences where we live[3], study and work, our health and well-being[4] and many other aspects of life. 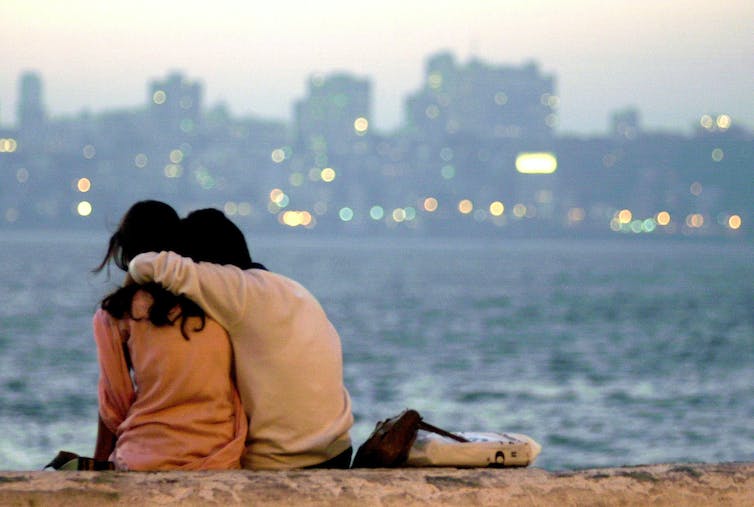 Falling in love with someone from a different class is the basis for many great novels — and real life complications. Aijaz Rhi/AP/AAP

Scholars argue class is also a cultural[5] experience. Through our upbringing, we accumulate a set of dispositions and sensibilities[6] — a way of being in the world — which feels comfortable and “natural” to us. While we may acquire new habits and skills later in life, these acquired dispositions may lack the comfortable feel associated with those learned in childhood.

Studying the role of class in our personal relationships also requires paying attention to how class is shaped by race, migration, gender, and sexuality.

So, we asked about people’s childhoods, the origin of their relationship and how class shapes everyday life. We covered: approaches to money, attitudes to work, decisions about where to live and home ownership, the use of free time, food preferences, holidays, social life, and parenting.

At the start of their relationships, many of our interviewees were not aware they had partnered across class. We heard stories of realisation.

For Stephanie, it was “probably knowing the schools” which led her to realise she was from a different class background to her partner, Harry. Harry is white and grew up in a “quite working class” coal-mining region. He attended a “disadvantaged” rural public school where “we didn’t have any, like, goalposts on our footy field … we had to use our schoolbags”.

Stephanie, who is also white, is from a wealthy urban background. She attended a prestigious school in Adelaide and described living in “this bubble of, like, private school world”. She described that bubble “bursting”.

Others developed a deeper understanding of their partner’s class backgrounds after meeting their family.

This was the case for Madeline on visiting David’s family. Previously, “I only knew him as a university student,” she explained, “and all of our conversations [were] about degrees, about our careers”. Madeline is Eurasian and from a wealthy background — she grew up speaking multiple languages in Asia and accessed an elite education in Europe. David, who is white, “grew up sort of in and out of housing commission” in coastal NSW.

As these relationships solidified, class-based differences became a complex and rewarding aspect of the relationship. Interviewees valued different things about partnering across class.

Madeline spoke of the conversations she and David had around privilege and poverty. She told us it was “a pretty awesome thing, if you can talk about these difficult topics with your partner”. 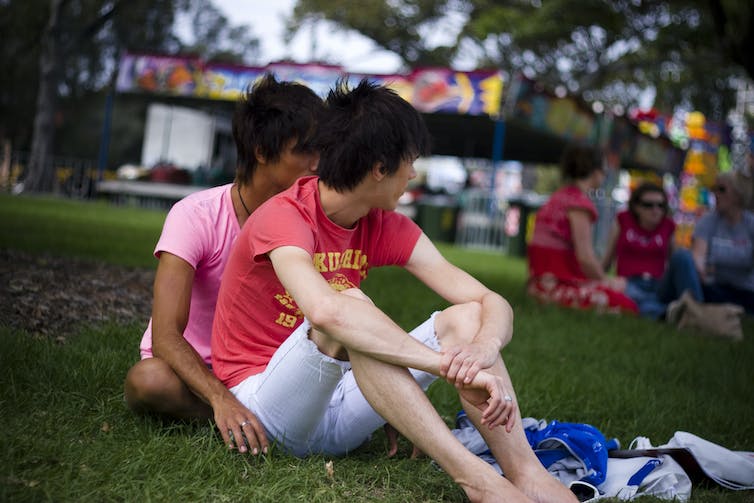 Some couples only realise they are from different classes once they meet each other’s families. Robert McGrath/AAP

Phuong felt “it was sort of good to say out loud” these experiences, “and think about privilege and how much it shapes you. And your kids ultimately”. Phuong is from a working-class, Vietnamese-Australian background and shares her Melbourne life with Tabby, who is white and from an affluent middle-class background.

As well as being interesting, other couples found class difference to be a healthy challenge and a source of humour and playful fun.

Tabby concluded a number of funny stories by reflecting that class difference had consistently “been very present […] in discussions about our relationship and, but usually in quite a light-hearted way”.

However, class-based differences could cause tension within these relationships. In Harry’s view, Stephanie

will never truly understand what it’s like to be broke. Or on the verge of broke. And I kind of live with it all the time.

He sees this as a “great conflict in our marriage” and “an unsolvable riddle”.

Others spoke of an ambivalence around their class identity, which did not reflect mainstream narratives of upward class mobility[8] as a desired goal.

Billy, who is white and from an upper middle-class background, and what he saw as “old money”, told us that his partner Adele “does feel sad” about their world in inner-city Sydney. Adele is from a “mixed-race” background and a tight-knit, working-class family in Wollongong. Billy and Adele are now part of the “well-educated middle” or “bourgeoise academics”, she joked. There was regret that their children might not get to experience the working-class culture of Adele’s childhood.

Our research shows class and class differences play a powerful role in our intimate lives, but this can be difficult to articulate. Public depictions of class difference commonly involve derision, mockery and comedy[9], rather than inter-class negotiation and understanding.

Our research captures experiences of couples already engaged in the daily, messy, complex and enriching work of negotiating class difference in their personal lives. Their insights can deepen our comprehension of what class is and means to people in Australia today. And for our interviewees, reflecting on the role of class in their intimate lives sometimes proved cathartic or illuminating.

This research is ongoing. We would love to hear from a wide range of people willing to discuss their experiences of love across class. If you would like to participate, you can get in touch here[11].