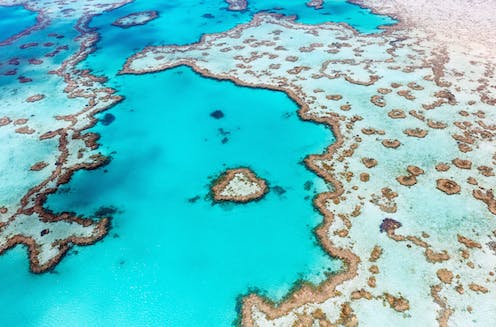 In what seems like excellent news, coral cover in parts of the Great Barrier Reef is at a record high, according to new data[1] from the Australian Institute of Marine Science. But this doesn’t necessarily mean our beloved reef is in good health.

In the north of the reef, coral cover usually fluctuates between 20% and 30%. Currently, it’s at 36%, the highest level recorded since monitoring began more than three decades ago.

This level of coral cover comes hot off the back of a disturbing decade[2] that saw the reef endure six mass coral bleaching events, four severe tropical cyclones, active outbreaks of crown-of-thorns starfish, and water quality impacts following floods. So what’s going on?

High coral cover findings can be deceptive[3] because they can result from only a few dominant species that grow rapidly after disturbance (such as mass bleaching). These same corals, however, are extremely susceptible to disturbance and are likely to die out within a few years.

The data are robust

The Great Barrier Reef spans[4] 2,300 kilometres, comprising more than 3,000 individual reefs. It is an exceptionally diverse ecosystem that features more than 12,000 animal species, plus many thousand more species of plankton and marine flora.

The reef has been teetering on the edge of receiving an “in-danger” listing[5] from the World Heritage Committee. And it was recently described[6] in the State of the Environment Report as being in a poor and deteriorating state.

Read more: This is Australia's most important report on the environment's deteriorating health. We present its grim findings[7]

To protect the Great Barrier Reef, we need to routinely monitor and report on its condition. The Australian Institute of Marine Science’s long-term monitoring program has been collating and delivering this information since 1985.

Its approach involves surveying a selection of reefs that represent different habitat types (inshore, midshelf, offshore) and management zones. The latest report[8] provides a robust and valuable synopsis of how coral cover has changed at 87 reefs across three sectors (north, central and south) over the past 36 years.

2022: By 2022, the same patch of reef was covered by a vibrant array of plating Acropora corals. Andy Lewis, Author provided

Overall, the long-term monitoring team found coral cover has increased on most reefs. The level of coral cover on reefs near Cape Grenville and Princess Charlotte Bay in the northern sector has bounced back from bleaching, with two reefs having more than 75% cover[9].

In the central sector, where coral cover has historically been lower than in the north and south, coral cover is now at a region-wide high, at 33%.

The southern sector has a dynamic coral cover record. In the late 1980s coral cover surpassed 40%, before dropping to a region-wide low of 12% in 2011 after Cyclone Hamish.

The region is currently experiencing outbreaks of crown-of-thorns starfish. And yet, coral cover in this area is still relatively high at 34%.

Based on this robust data set, which shows increases in coral cover indicative of region-wide recovery, things must be looking up for the Great Barrier Reef – right?

Are we being catfished by coral cover?

In the Australian Institute of Marine Science’s report, reef recovery relates solely to an increase in coral cover, so let’s unpack this term.

Coral cover is a broad proxy metric that indicates habitat condition. It’s relatively easy data to collect and report on, and is the most widely used monitoring metric on coral reefs.

But in this instance, it’s more likely the reef is being dominated by only few species, as the report states that branching and plating Acropora species have driven the recovery of coral cover.

Acropora coral are renowned for a “boom and bust” life cycle. After disturbances such as a cyclone, Acropora species function as pioneers. They quickly recruit and colonise bare space, and the laterally growing plate-like species can rapidly cover large areas.

Fast-growing Acropora corals tend to dominate during the early phase of recovery after disturbances such as the recent series of mass bleaching events. However, these same corals are often susceptible to wave damage, disease or coral bleaching and tend to go bust within a few years.

Inferring that a reef has recovered by a person being towed behind a boat to obtain a rapid visual estimate of coral cover is like flying in a helicopter and saying a bushfire-hit forest has recovered because the canopy has grown back.

It provides no information about diversity, or the abundance and health of other animals and plants that live in and among the trees, or coral.

It suggested that 28 of 368 species of hard coral recorded at that location haven’t been seen for at least a decade, and are at risk of local extinction.

Lizard Island is one location where coral cover has rapidly increased since the devastating 2016-17 bleaching event. Yet, there is still a real risk local extinctions of coral species have occurred.

Read more: Almost 60 coral species around Lizard Island are 'missing' – and a Great Barrier Reef extinction crisis could be next[11]

While there’s no data to prove or disprove it, it’s also probable that extinctions or local declines of coral-affiliated marine life, such as coral-eating fishes, crustaceans and molluscs have also occurred.

Without more information at the level of individual species, it is impossible to understand how much of the Great Barrier Reef has been lost, or recovered, since the last mass bleaching event.

Based on the coral cover data, it’s tempting to be optimistic. But given more frequent and severe heatwaves and cyclones are predicted in the future, it’s wise to be cautious about the reef’s perceived recovery or resilience.