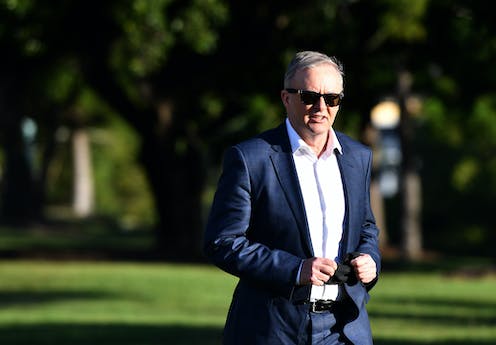 This week’s Newspoll, conducted July 14-17 from a sample of 1,506, gave Labor a 53-47 lead, a two-point gain for Labor since the previous Newspoll three weeks ago. This is the biggest Labor Newspoll lead for this parliamentary term[1].

Anthony Albanese’s net approval was down three points to -8. Morrison retained a 51-33 lead over Albanese as better PM (53-33 previously).

There are two COVID questions in this Newspoll that were repeated three weeks ago, and again in April; these show large drops for Morrison. Almost all of the previous Newspoll[3] was taken before the Sydney lockdown was announced. Morrison had a 52-45 good rating on handling of COVID (61-36 in late June, 70-27 in April).

The vaccination rollout had a 57-40 dissatisfied rating (50-46 satisfied in late June, 53-43 satisfied in April). In late June[4], 36% thought there would have been no difference in handling COVID had Labor been in government, while 27% thought Labor would have handled it worse and 25% better.

During 2020, there was no choice other than lockdown to prevent COVID spreading, and so people tolerated the 2020 lockdowns. But people are now far more frustrated with the current Sydney and Melbourne lockdowns as Australia is far behind comparable countries in its vaccination rollout[5].

But will the economy save the Coalition?

While the Coalition is doing badly now, the next election is not required until May 2022. By then, it is very likely Australia’s vaccination percentage will be high enough that lockdowns will no longer be needed to suppress COVID outbreaks.

The economy gives the Coalition good reason to be optimistic about the next election. In June, the unemployment rate dropped 0.2% to 4.9%, the lowest it has been for ten years.

The employment population ratio – the percentage of the eligible population that is employed – increased 0.1% to 63.0%, the highest it has been for at least the last decade. Data from the ABS[6].

While there will be economic damage from the long Sydney lockdown, we now know that once lockdowns end, the economy should rebound quickly. And people will be eager to forget the dreadful days of lockdowns.

This UK poll graph[7] shows the Conservatives moving from a near-tie with Labour to a high single digit lead from late 2020, as UK vaccinations massively reduced COVID deaths from their horrific levels[8] in January.

In last fortnight’s Essential poll[9], taken a week into the Sydney lockdown, Morrison’s approval was down six since June to 51% and his disapproval up four to 40%, for a net approval of +11, down ten points. That’s Morrison’s lowest net approval in this poll since the pandemic began. Albanese’s net approval was up three to +6, and Morrison led as better PM by 46-28 (48-28 in June).

The federal government had a 44-30 good rating on response to COVID, down from 53-24 in early June and 58-18 in late May, before the Victorian and NSW lockdowns.

51% of NSW respondents thought their state government moved at about the right speed in enforcing lockdown restrictions, 39% thought it too slow and 10% too quick.

Newspoll released aggregate data[10] for its polls conducted from April to June on July 12. The overall result was a 51-49 Labor lead, with a 50-50 tie in NSW, a 53-47 Labor lead in Victoria, but a 53-47 Coalition lead in Queensland. Reflecting the education shift that I discussed in May[11], the Coalition led by 52-48 among those with no tertiary education, with Labor ahead with TAFE/technical and university-educated.

The Poll Bludger[12] had further analysis of the changes in state and demographic results, both since the January to March quarterly, and since the 2019 election.

David O’Byrne was elected Tasmanian Labor leader on June 15. But he was forced to resign[15] less than three weeks later owing to sexual harassment allegations. Rebecca White, who led Labor to defeats in 2018 and 2021, was returned to the leadership[16] on July 7.

A byelection will occur in the Labor-held Queensland state seat of Stretton[17] on Saturday. This byelection was caused by the death of the sitting MP. Labor won it by a 64.8-35.2 margin at the 2020 state election.

I wrote for The Poll Bludger[18] that UK Labour narrowly held Batley and Spen at a July 1 byelection that was expected to be a Conservative gain. Also covered: French regional elections and polling ahead of the presidential election in April 2022; and the Democratic mayoral primary in New York City, which used preferential voting for the first time.