The Australian government introduced new regulations[1] last week that could have a major chilling effect across Australia’s diverse charities sector.

The government’s aim[2] was clear: the regulations are intended to target “activist organisations[3]”, and specifically crack down on “unlawful behaviour”.

Despite this rhetoric, there is no evidence unlawful behaviour by charities is a problem of any significance. By clamping down on charities in this way, the government is not only curtailing their ability to organise peaceful protests, it is imposing more unnecessary red tape on an already highly-regulated sector.

What would the regulations do?

The regulations would give the Australian Charities and Not-for-profits Commission[4] (ACNC) new powers to take action against a charity if it commits, or fails to adequately ensure its resources aren’t used to commit, certain types of “summary offences[5]”.

These are generally a less serious type of criminal offence, and can include acts such as trespassing, unlawful entry, malicious damage or vandalism.

If the ACNC commissioner believes a charity is not complying with the regulations, they would be able to take enforcement action, which may include deregistering the charity. This would lead to the charity losing tax concessions — one of the incentives for people to donate to them.

In effect, the regulations mean that if a charity organised a protest in front of a government department and initially refused to leave, this could be considered trespassing. And this could then be grounds to have the charity deregistered.

Are these regulations necessary?

There is little, if any, evidence of a need for the regulations.

First, a comprehensive review[6] of the ACNC legislation commissioned by the government in 2018 did not identify any issues with unlawful behaviour by charities.

In fact, the review recommended removing the ACNC’s existing power to take action against charities that commit serious breaches of the law. It pointed out that charities must already comply with all laws that they are subject to, and it is not the ACNC’s responsibility to monitor compliance or impose sanctions for breaches.

Despite this, the new regulations would extend the reach of the ACNC and expand its existing powers even further.

And importantly, there is no evidence charities — or their staffs or volunteers — are engaging in widespread unlawful activity. When questioned at a recent Senate Estimates hearing, ACNC Commissioner Gary Johns said[8] the commission’s data did not indicate this was a problem.

Even the government’s own regulatory impact assessment[9] asserts only a “small number” of charities have engaged in unlawful behaviour. However, even this claim is not backed up by solid evidence, with the assessment saying it is based on

media coverage in recent years in relation to protests on forestry, mining and farming lands.

Charities in Australia are already highly regulated and subject to a broad range of obligations[10]. They must also abide by any number of laws, for example, occupational health and safety and criminal laws.

And the ACNC already has extensive investigation[11] and compliance[12] powers. If charities breach any of the laws they are subject to, they can be sanctioned just like other organisations — and the same applies to their staff.

In addition, charities are already required[13] to take steps to ensure their directors comply with duties, such as acting with reasonable care and diligence. This includes monitoring and managing risks arising from a charity’s activities.

Drafted in a vague way

Perhaps most concerningly, the proposed regulations are worded in a very vague manner, and although improvements were made in response to public consultation[14] on a draft version, major problems remain.

First, they require a charity to “maintain reasonable internal control procedures” to prevent its resources from being used to promote unlawful activities.

According to the regulations, this could cover things such as who can access or use a charity’s funds, premises or social media accounts, and what kind of training charity directors and employees must undertake.

What is “reasonable” in this context involves making very subjective judgements. While the ACNC will provide guidance to charities on this, many organisations will still face considerable uncertainty.

Further, the regulations would not require a conviction, the laying of charges, or even a formal allegation of an offence being committed before the ACNC can take action. The wording only refers to “acts or omissions that may be dealt with” as a summary offence.

This is very open-ended language, but the crux of it is that a charity could be deregistered because it did something the ACNC commissioner thinks is a summary offence. The action itself, however, may not actually meet the criteria for a summary offence because that’s something only a court can determine.

The ACNC commissioner is the ultimate decision maker on these matters. The regulations do not include any factors or criteria that need to be considered when making a decision, other than saying the ACNC “may” (there’s that word again) consult with law enforcement or other relevant authorities.

The chilling effect of the regulations

Even if a charity is deregistered but then successfully appeals a decision[16], it may no longer have access to tax concessions, it may lose its donors and other supporters, and it may have its reputation tarnished within the community.

The ACNC seeks to implement the law as it understands it. Its focus is on providing guidance to charities rather than using strong enforcement powers straight away. But the vagueness and breadth of the regulations may lead to misunderstandings or regulatory overreach, and create a more uncertain environment for charities.

They will also impose yet another requirement that charity boards and management must consider. Given charities are already well-regulated, if anything, they need unnecessary red tape removed rather than having more of it imposed on them.

And the regulations will likely have a chilling effect. Charities will be more cautious when it comes to organising public advocacy activities such as peaceful protests — or steer clear of them altogether — in order to avoid falling afoul of the regulations. Such activities are an important part of Australia’s democracy. 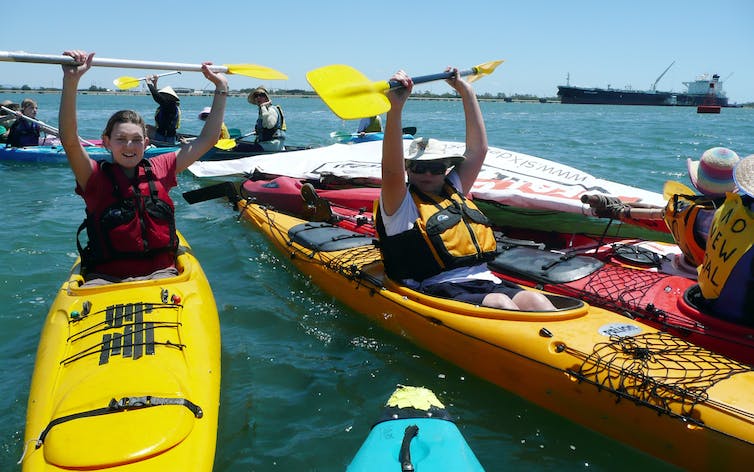 Protesters with the environmental group Friends of the Earth take to the water in an attempt to blockade a coal ship in Brisbane. Six Degrees/PR Handout Image/AAP

Can the regulations be stopped?

Although the regulations have been made, they cannot come into force until they have been tabled in both chambers of parliament, and the disallowance period[17] has passed.

If a disallowance motion is successful in the House or Senate, then the regulations will be invalid and will not take effect. Given the government does not have a majority in the Senate, this is a possibility.

Much is riding on the crossbenchers — not just the impact the regulations would have on individual charities, but also the kind of society we want Australia to be.