A timeless tradition in political journalism is trying to find a narrative that explains an electoral outcome.

A widely accepted narrative to explain Barack Obama’s win over John McCain in 2008 was that Americans wanted to embrace the “change” candidate who appeared the most dissimilar to then-President George W Bush. The narrative four years later in 2012 was that Republican Mitt Romney was too “elite” to resonate with American voters, and Obama was returned. Then in 2016, it was that Hillary Clinton was so confident of becoming president, she overlooked “Middle America”.

The accuracy of these widely accepted narratives in explaining electoral victories is fiercely debated. So, too, will be many of the narratives for Joe Biden’s election win to become the 46th president of the United States.

Another potential narrative may be the death toll of nearly a quarter of a million Americans from the coronavirus pandemic was simply too overwhelming for President Donald Trump to overcome. When a majority of Americans blame[2] the US government for the coronavirus situation in the country now seeing record numbers[3] of infections each day, it’s not hard to see why they would want to change course.

Yet perhaps the most lasting narrative of this election is how fearful, uncertain, and polarised Americans are. Although this is not novel in modern American history, the ever-increasing reach and volume[4] of this sentiment certainly is.

Read more: 'America First' is no more, but can president-elect Biden fix the US reputation abroad?[5]

In receiving more than 70 million votes, more Americans voted for Trump in this election than any other candidate in history – except for Biden, who earned more than 74 million votes. (Both of these totals will likely increase as further ballots are counted.) There’s no denying increased voter participation is an encouraging sign for American democracy, yet some of the passions fuelling that turnout are worrying.

Recent polling found a majority[6] of Americans unwilling to agree the other side’s electoral victory in the presidential election should be accepted. 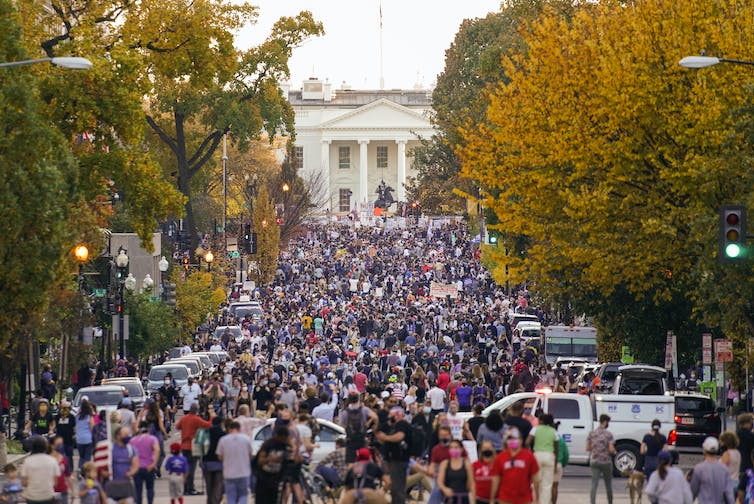 Americans recognise this in the other side too: only 16%[7] of Trump voters said Democrats would accept a Trump re-election; 26% of Biden supporters said Republicans would accept a Biden win.

Alarmingly, other polling found around a third of Americans[8] believed violence could be justified in support of their political parties’ goals, while 21% of those with a strong political affiliation were “quite willing to endorse violence if the other party wins the presidency”.

With more than three quarters of Americans saying they expected violence[9] in the aftermath of the election, a record number of Americans in 2020 decided to arm themselves[10].

For more than a decade, the United States has had more guns than people[11]. But 2020 has already broken records for the number of gun sales[12]. This was often a partisan trend in previous years – Americans who leaned Republican were more than twice as likely[13] to own a gun as those who leaned Democratic – yet there are some indications that in 2020, increased gun ownership became bipartisan[14].

Just last month, the Trump administration’s own Department of Homeland Security – an organisation set up in the aftermath of the September 11 2001 terror attacks – said it was Americans, specifically violent white supremacists, who posed[15] the “most persistent and lethal threat in the homeland”.

Amid reports of a foiled plot to attack a vote-counting centre in Philadelphia[16] and continued inflammatory rhetoric, there is little question as to whether violence in the aftermath of this election is likely.

So what happens now?

Trump will remain president for another 73 days, as a “lame duck” president. Biden will be inaugurated on January 20 2021.

So far, Trump has refused to concede defeat – in fact, he in insisting he won[17] without offering any evidence of it – and has launched a series of legal challenges to the outcome. Many of those challenges have already been dismissed[18].

Simultaneous to his ceaseless battles over the integrity of his electoral loss, Trump will likely face extensive lobbying for presidential pardons – a unique privilege given to the president by the constitution “to grant reprieves and pardons for offenses against the United States”.

Conventional presidents have traditionally been concerned about how history will perceive their pardons[19]. Trump is certainly not conventional, having used[20] and considered using pardons[21] for much of his presidency[22].

Trump will eventually leave the White House. But it is hard to see his loyal base leaving him anytime soon. Like so many other norms, Trump will be unlikely to adhere to the norm that former US presidents retire from political life after leaving the White House. 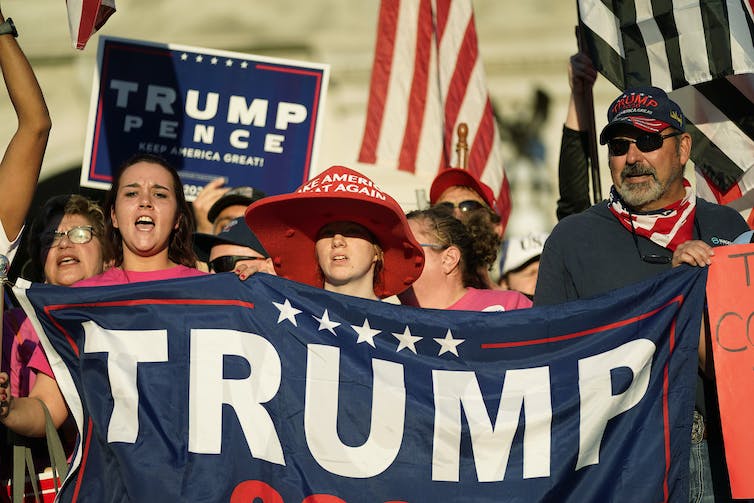 Trump will leave the White House in January, but he still has many supporters, leaving the possibility of him running again in 2024 an open question. AAP/AP/Julio Cortez

The fact Trump is still eligible to run for another term of office may allow him to follow in the footsteps of President Grover Cleveland, who was ousted from the White House by Benjamin Harrison in 1888, but four years later, defeated Harrison and took back the presidency.

While some Republican leaders are distancing themselves[23] from the president, the fact Trump still enjoys a 95% approval rating among Republicans[24] means he is undeniably an early favourite for the 2024 Republican nominee for president.

Lastly, Biden will assume the presidency facing multiple crises, ranging from a pandemic and economic downturn to overwhelming levels of fear, uncertainty, and polarisation. Should the US Senate remain Republican-controlled, he will need to navigate these crises in the face of a divided government. In this scenario, his former Republican colleagues in the senate[25] would have final approval of his cabinet and legislative agenda.

From expanding NATO[26] to the 2009 economic stimulus bill[27], Biden comes to the White House with arguably more bipartisan achievements than any president of the last half century. The question is whether he will overcome the widely-accepted narrative of a dangerously divided America.

Read more: Even if Biden has a likely win, leading a deeply divided nation will be difficult[28]