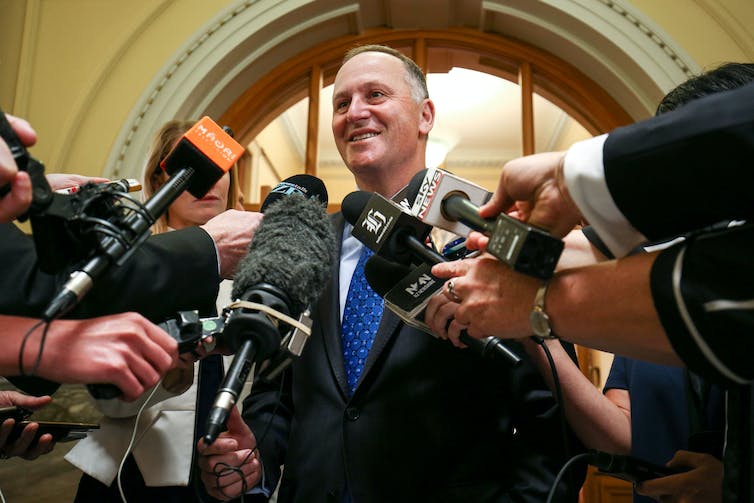 Hands up if you know anything about Christopher Luxon other than he was once CEO of Air New Zealand, he’s been hailed as the new John Key, and he’s the MP for Botany. Anyone?

Luxon takes on the role of leader of Her Majesty’s Opposition – the sixth since Jacinda Ardern took the reins across the political aisle (or seventh if you count Nikki Kaye’s day-long stint between Todd Muller and Judith Collins) – at a time when the toughest of all political gigs is as hard as it has ever been.

From his new office he will confront a global pandemic that has just taken an unwelcome turn (meaning media attention will quickly shift elsewhere), a battle-hardened prime minister with 13 years’ parliamentary experience (compared with Luxon’s 12 months), a fractured caucus and a floundering party organisation.

You suspect there will be moments in the weeks ahead when he will think back fondly on his days at Air New Zealand.

There will be little time for nostalgia. Luxon has work to do and not long to do it. Top of the list will be introducing himself to the country’s voters, to whom he is not well known.

His maiden parliamentary speech[1] provides a few helpful insights. In it he referred to his years with Unilever and Air New Zealand, which will play well to the party faithful. (Although one should be wary of assuming a successful private sector career necessarily translates into a decent political one. Sure, there’s John Key – but there’s also Donald Trump.)

Some of the other stakes Luxon put in the ground may prove more contentious, not least his religious beliefs. He may profess that his faith is “not itself a political agenda” but there is still the question of how some of Luxon’s views will play with the liberal wing of the party’s base, a number of whom defected to Labour[3] in 2020.

National needs to bring those people back into the fold, but some will find Luxon’s conservatism – he opposes voluntary euthanasia and abortion law reform – off-putting. The appointment of Nicola Willis as deputy will help, but Luxon is the face of the party and he will need to ensure he doesn’t permanently alienate dove-ish National voters.

John Key after resigning as prime minister in 2016, setting in train the events leading to Luxon becoming leader. GettyImages

In the shadow of Key and Ardern

National has a Key problem, in that it is still searching for a replacement for the man who led the party through the golden years. Luxon has just secured the top job in no small measure because he is thought to be the closest thing National presently has to the original.

Read more: Judith Collins may be gone but New Zealand’s search for a credible and viable opposition is far from over[4]

But going Key-lite seems risky when the successor has to go up against a Labour leader who – two years of lockdowns, MIQ and vaccine mandates notwithstanding – remains streets ahead[5] in the preferred prime minister stakes. National has already tried that tactic with Muller and it didn’t end well[6].

Reaching back to a playbook from the past for an answer to present and future challenges seems a little unimaginative, especially when the past in question looks increasingly like another country.

We may have avoided the worst excesses of political polarisation and populism in Aotearoa New Zealand (so far, anyway), but we have not been entirely immune from them. In the COVID era those pressures are building. Key was prime minister in the before times, and there is nothing in Luxon’s political CV to suggest he is equipped to deal with contemporary challenges of a kind Key never had to face.

A schism in National’s broad church

The second big challenge concerns whether National can once again become a broad political church.

In recent years the parliamentary party has become dangerously polarised. The urban liberal wing has been increasingly squeezed out by Christian conservatives – “dubbed ‘the Taliban’ by the party’s remaining centrists”, according to one commentator[7].

There is a view that the simple act of anointing Luxon will restore the natural order of things. But what if it doesn’t? What if the same commentator is right and National continues to morph into “a Trump-like cult”?

The party bled significant numbers of votes in both directions in 2020. Some within National must lie awake at night wondering if that was less a blip than the start of the party’s own descent into the turmoil currently playing out in Canada, France, Germany, the UK and the US, where established centre-right political parties are being slowly eroded from within by increasingly strident populist elements.

Read more: Why Jacinda Ardern’s ‘clumsy’ leadership response to Delta could still be the right approach[8]

A leader among leaders

That divide is already apparent in National’s caucus. Luxon’s success (or failure) in dealing with it may have existential consequences for the party stretching well beyond the next election.

If National is to survive, let alone prosper, the new leader will have to show that his predecessor Judith Collins’ taste for culture wars[9] is not now endemic to the party.

Finally, Luxon has the dubious luxury of having four former party leaders to help and guide him. Muller may be reviewing his options[10] now that Collins has gone, Shane Reti may be feeling a little jilted, Simon Bridges’ ambitions have just been thwarted (again) and Collins has made it clear she has no intention of leaving parliament altogether.

But all that lies in the future. National is looking for a saviour and for now has found its man. Christopher Luxon will just be praying he hasn’t agreed to a Hail Mary pass.