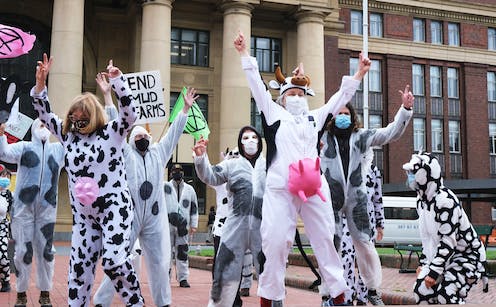 To understand the agreement states reached at the COP26 climate summit[1] in Glasgow earlier this month, it’s important to explore how climate activism has grown and changed since the Paris Agreement[2] in 2015.

Climate activists have played a pivotal role. They have kept the pressure on governments to implement their Paris pledges and to increase their ambition in the coming years.

Two new and powerful climate groups — Fridays for Future and Extinction Rebellion — have been particularly important. Our research[3] suggests they have championed new models and tactics of activism, and also grappled with racism in their own ranks.

The distinctiveness and evolution of these two groups tells us a lot about contemporary climate activism and the direction it is likely to take.

Fridays for Future[4] and Extinction Rebellion[5] have ushered in a new era of climate dissent by challenging conventional patterns of protest.

Fridays for Future have successfully mobilised millions of people across the world[6]. Our research shows they have continued to mobilise people, albeit online rather than on the streets, during COVID lockdowns.

Extinction Rebellion have normalised direct action and the use of economic disruption through civil disobedience by occupying spaces in London, Dar es Salaam, Mexico City and Rome. Recently, they glued themselves[7] to the steps of the New Zealand parliament to protest against New Zealand’s lacklustre climate policies.

These two groups exemplify the changes in climate activism over the last decade. Digital technologies enable distributed digital activism — organising which happens around a central goal but allows local activists to develop messages and tactics most relevant to their local context.

Read more: What lies ahead for Fridays for Future and the youth climate movement[8]

The climate change group 350.org pioneered this form of digital organising in 2009 with their global climate action days[9]. This decentralised structure meant anyone could be involved, anywhere.

Distributed organising has also allowed climate activist groups to become more inclusive. Interviews we conducted with Fridays for Future activists suggest the group includes a spectrum of political views among young people who share a passion for protecting the environment and holding governments accountable to the Paris Agreement.

In introducing these new tactics, Fridays for Future and Extinction Rebellion have not only renewed the climate movement, but also accelerated climate action. Germany’s outgoing chancellor Angela Merkel[10] has acknowledged Fridays for Future expedited the nation’s response to climate change.

Climate activists now have a powerful role to play in ensuring governments implement the Glasgow Climate Pact. They may not only force change from the outside. Governments and businesses are increasingly engaging and hiring young activists to help with their climate strategies.

The new Biden administration, for instance, has invited 19 year-old Black climate activist Jerome Foster II[12] to serve on the White House environmental justice advisory council. Foster spent 58 weeks protesting outside the White House for climate action, and now he’s on the inside.

While this represents a win for activists in their efforts to gain mainstream legitimacy, it remains unclear whether working within firms and governments will drive radical climate policy.

The Movement for Black Lives (M4BL[13]) protests during the northern hemisphere summer of 2020 prompted soul searching within many climate activist groups, particularly as racism has dogged climate groups[14] in the US, UK, Germany and beyond.

In the US, many established environmental non-governmental organisations were dominated by white staffers and had only 22% non-white senior staff, even though non-white ethnic groups make up around 40% of the total US population.

Our interviews suggest the Black Lives Matter protests prompted many environmental groups to look inwards and to diversify who they hired and promoted to leadership positions. Extinction Rebellion had to reconsider its use of direct action tactics in which activists deliberately aim to be arrested as these were more dangerous for activists of colour.

However, institutionalised racism has sometimes proved impossible to resolve. In one instance, a New Zealand chapter of Fridays for Future disbanded because it had, in its own words[15], become a “racist, white-dominated space” which “avoided, ignored and tokenised BIPOC [Black, Indigenous and Peoples of Colour] voices and demands”.

Indigenous communities have long demanded climate justice[17]. Māori climate activist India Logan O’Reilly[18] spoke powerfully at the opening plenary of Glasgow climate summit, urging leaders to “learn our histories, listen to our stories, honour our knowledge and get in line or get out of the way”. We can only hope that states will heed this call and internalise calls for intersectional climate action.