The Sriwijaya Air Flight 182 disaster serves as a warning for aviation safety regulators, not only in Indonesia but worldwide.

Four minutes after taking off from Jakarta in heavy rain on January 9, the Boeing 737-500 nosedived into the ocean, killing all 62 passengers and crew. The cause of the crash has yet to be determined.

The tragedy has naturally raised questions about Indonesia’s air safety standards. Over the past decade the nation has done much to improve them. But more still remains to be done. As commercial aviation recovers from its COVID stall, regulators will need to focus on aviation safety to ensure the progress is not reversed.

Indonesia’s commercial civil aviation sector has experienced explosive growth in the past two decades, with the number of passengers increasing from 10 million in 2000 to 115 million in 2018[2]. 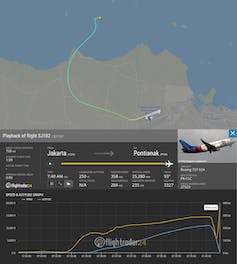 The flight path of Sriwijaya Air Flight 182 before it went missing on January 9 2021. Flightradar24.com/EPA

This is due to Indonesia’s population and geography. It is the world’s fourth-most populous country (after China, India, and the United States), with more than 270 million people spread over five main islands and about 6,000 smaller islands[3].

Air travel is the obvious way to get around, and it has become more affordable due to both competition (the government opened the domestic airline industry to competition in the 1990s) and rising incomes (with GDP per capita doubling since 2000[4]).

At the expense of safety?

The explosive growth in Indonesian air travel initially happened, to a certain extent, at the expense of safety. In the 2000s there were more than a dozen serious incidents and several major disasters.

These included Mandala Airlines Flight 91, which in September 2005 crashed into a neighbourhood in Medan, the capital city of North Sumatra, killing 149 people; and Garuda Indonesia Flight 200, which crashed while landing at Yogyakarta, Java in March 2007, killing 20 of the 133 passengers and one crew member. 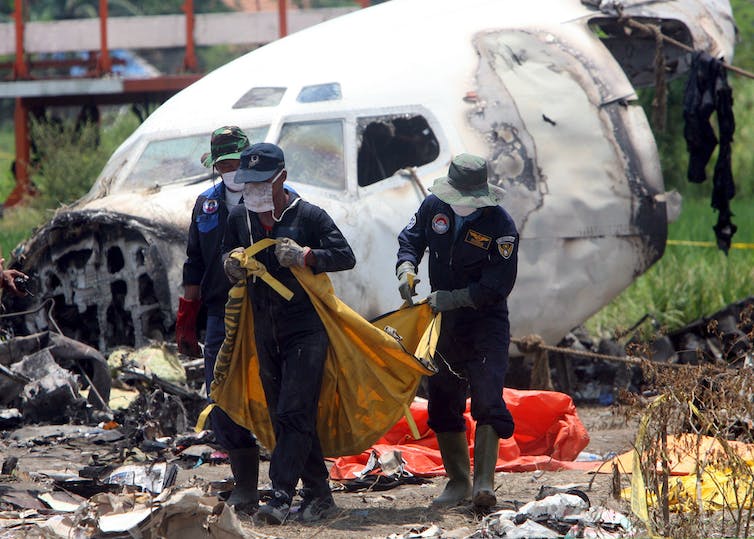 In response, the European Union took the rather drastic step of banning all Indonesian carriers[6] from its airspace in July 2007. (This ban was only fully lifted in June 2018[7].)

Improvement in Indonesia’s aviation safety record can be seen in the data provided by the Aviation Safety Network[9]. From 2000 to 2009, there were 27 fatal aviation incidents in Indonesia. From 2010 to 2019, there were 18.

The US Federal Aviation Administration’s International Aviation Safety Assessment Program[11] rates Indonesia as a Category 1 country. This implies Indonesia’s aviation sector conforms to ICAO requirements and allows Indonesian carriers to fly to the US.

At the same time, much work remains to be done to bring Indonesia’s aviation safety level up to that of the OECD nations. Japan, for example, has recorded only five fatal aviation incidents since 2000.

In the US (the world’s largest aviation market before the pandemic) the last crash with similar fatalities to that of Sriwijaya Air Flight 182 was in February 2009[12], when Colgan Air Flight 3407, a turboprop plane flying between Newark, New Jersey and Buffalo, New York, crashed shortly before arrival, killing all 49 people on board (and one person on the ground). 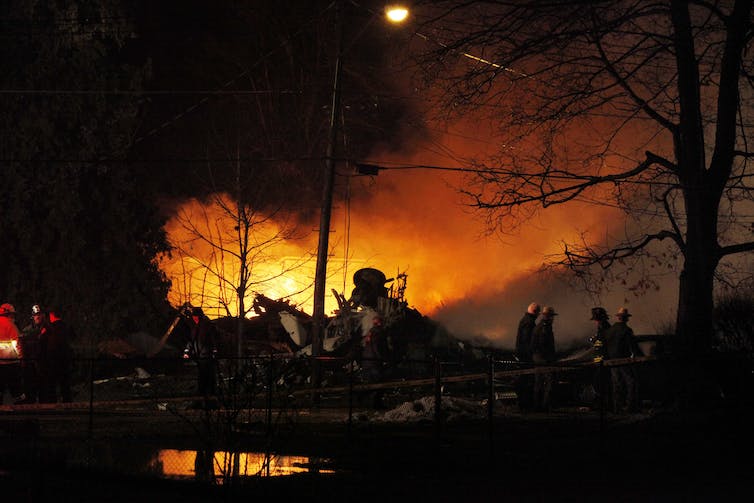 Colgan Air Flight 3407, a Bombardier Dash-8 Q400 turboprop airliner, crashed into a house on February 12 2009, killing one person on the ground and all 49 passengers and crew. David Duprey/AP

Globally, commercial passenger airline regulation can be legitimately proud of the safety record it has achieved.

According to aviation researchers, 2017 was the safest year in commercial aviation history[13]. There were just 79 deaths related to incidents with commercial flights – an impressive record, given airlines carried nearly 4 billion passengers that year. By all metrics, flying in the 21st century has been far safer than in the last two decades of the 20th century.

Regional disparities still persist, however. According to an IATA analysis[14], Africa and the Commonwealth of Independent States (Russia and eight other former Soviet countries) have considerably worse safety records than other regions. The Asia Pacific region, which includes Indonesia, is about the global average.

How COVID-19 may affect safety

The COVID-19 pandemic has dealt a serious blow to the commercial passenger airline industry. The IATA estimates global passenger volume in 2020 was one-third[15] that in 2019. Return to those levels is not expected before 2023. Whether the industry returns to its pre-pandemic growth trajectory is, at this point, anyone’s guess.

Against this background, my concern is potential of the pandemic to seriously affect the aviation safety culture that took decades to build.

With aircraft sitting idle, pilots remaining on the ground, mechanics and air traffic controllers out of work or underemployed, the question of bringing people and equipment up to speed will be important as travel restrictions lift.

Read more: Once the pandemic is over, we will return to a very different airline industry[16]

The key message for aviation safety regulators, both in Indonesia and worldwide, is simple.

They have have made great progress in building, improving and maintaining safety culture in the industry. But post-pandemic recovery will require an extra sharp focus on aviation safety, above and beyond what has been done before.

This will be especially intense for nations such as Indonesia. The fate of Sriwijaya Air Flight 182 is a reminder of the work still to be done, and the challenges to come.