New Zealand’s endemic tuatara (Sphenodon punctatus) are the sole survivors[1] of an ancient reptile order called Rhynchocephalia[2]. Once widespread across New Zealand, tuatara survive in only a fraction of their historic range, on small offshore islands and in fenced eco-sanctuaries. 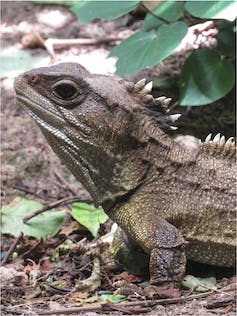 Male tuatara are usually larger and have a more triangular head than females. Author provided

Despite massive conservation efforts to restore populations, our lack of knowledge about tuatara reproduction means some conservation techniques remain currently off the table.

Tuatara are unique among reptiles in that males don’t have a penis or hemipenes, making sperm collection difficult. But in our latest research[3], we describe how we managed to collect and characterise live sperm from tuatara for the first time.

Perhaps surprisingly, we found that tuatara sperm are the fastest swimmers of any reptile studied to date. This could help us boost the conservation of this unique and treasured species.

The global decline of wildlife has necessitated creative and far-reaching conservation efforts, including the freezing of eggs and sperm (known as gametes).

Gamete banking is a proactive conservation approach where researchers preserve genetically important sperm and egg cells before this genetic diversity is lost. While this is never preferable to natural reproduction, assisted reproduction has already been used with success on critically endangered species like the New Zealand flightless parrot kākāpō[4] (Strigops habroptilus).

However, developing the methods for gamete cryopreservation for any species, especially one that represents a unique evolutionary branch, takes time.

Our first challenge was to figure out a way to sample live sperm. The male reproductive anatomy sets tuatara apart from other reptiles — without a penis, their reproduction is more bird-like.

Tuatara transfer sperm when the male aligns his cloaca (which serves as the opening for digestive, reproductive and urinary tracts) with the female’s. We found the best approach to collect a viable, sufficient sperm sample was just after this “cloacal kiss”, when the sperm was still visible on the edge of the female’s cloaca. 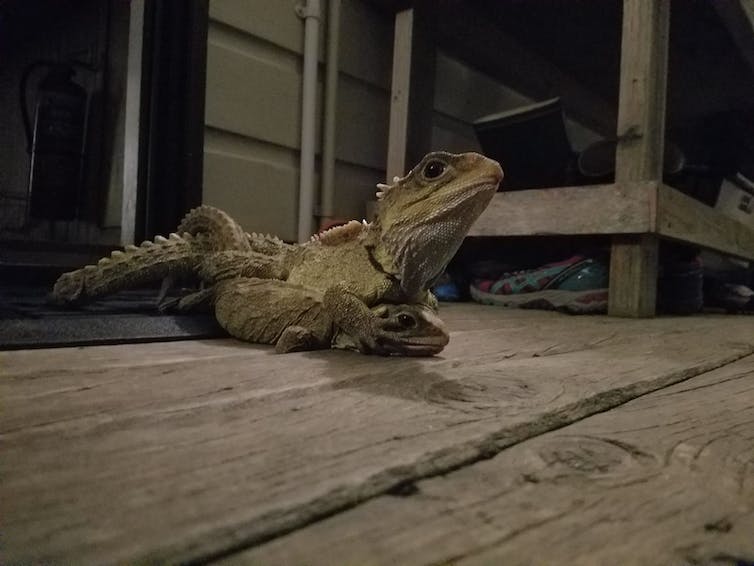 Tuatara mating: the male is on top and twists his hind limbs and tail to bring his cloaca close to the female’s. Author provided (no reuse) 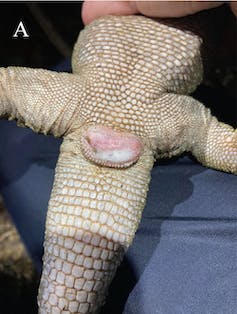 Sperm is visible on the female’s cloaca after separating a mating pair. Author provided

For the very first time, we were able to collect, image and measure the speed of swimming tuatara sperm. Even though tuatara generally live a long, slow life, it turns out their sperm are surprisingly fast.

Having fast swimmers may be an adaptation to aid male tuatara in their reproductive efforts. Other reptiles have an intromittent organ (either a penis or a pair of hemipenes) to aid in sperm delivery, but tuatara rely solely on the ability of their sperm to swim inside the female’s cloaca after mating.

While having sperm with distinct characteristics may be what helps tuatara reproduce, it also means the techniques required for cryobanking this sperm must be equally unique.

Once widespread across New Zealand, tuatara now persist in 45 distinct populations across a fraction of their historic range[5].

The sex of tuatara hatchlings is determined by the temperature the eggs are exposed to during incubation, with more males hatching at warmer temperatures. As climate change continues to raise temperatures in New Zealand, we expect this will skew tuatara sex ratios, with the potential to drive some populations to be male-dominated and therefore functionally extinct[6].

Formulating the best cryoprotectant to preserve sperm from the sole surviving species in a lineage as old as the dinosaurs with a unique reproductive anatomy amongst reptiles, would be challenge enough. When you add in the fact that tuatara mate like birds, are slow to reproduce, but paradoxically have extremely fast swimming sperm, it makes cryopreserving tuatara sperm a thorny problem.

Read more: Not a lizard nor a dinosaur, tuatara is the sole survivor of a once-widespread reptile group[8]

Our efforts to help ensure the future of the last of the Rhynchocephalians also taught us a great deal about these unique animals, viewed by Māori as guardians of knowledge.

Earlier this year, at the end of the Austral summer, we undertook another research season, collecting sperm and characterising the males it was collected from. Going forward, we will undertake more trials, test new cryopreserving agents and progress toward long-term gamete banking of this important reptile. Doing so will provide a pathway toward new conservation strategies for this taonga (treasured) species.

We would like to acknowledge Helen Taylor, of the Royal Zoological Society of Scotland, who has contributed to this research.