Former President Donald Trump may see himself as a winner, but the candidates he endorses don’t always win. In fact, his endorsement often helps the opponents of his candidates.

That was true in the 2018 midterm elections, and a similar effect could happen in the upcoming 2022 midterms. One early indication: In late July, Republican and Trump endorsee Susan Wright lost to fellow Republican Jake Ellzey[1] in the special election runoff in Texas’ 6th Congressional District.

The failure of Trump’s endorsement to propel Wright to victory has raised questions among political observers about the sway the former president has in GOP politics[2]. The loss led to Trump’s inner circle[3] casting about for whom to blame.

While some Trump allies were quick to point fingers at internal party divisions[4] and Republican infighting, Trump himself blamed Democratic voters[5] for Susan Wright’s loss.

Our work[7], and the work of other political scientists[8], suggests that endorsement backlash frequently occurs in contemporary politics. As political scientists, we observed the prolific tweeting of President Trump and wanted to know whether his endorsements of congressional candidates affected their campaigns and the campaigns of their opponents.

Ultimately Trump’s endorsement was more detrimental than helpful. It led to an increased vote share going to the Democratic opponent of the candidate Trump endorsed. 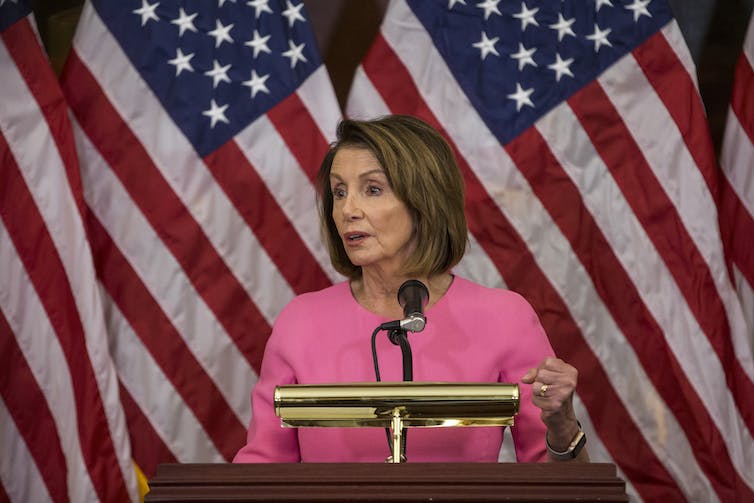 Democrat Nancy Pelosi became Speaker of the House in 2018 when the GOP, including Trump-endorsed candidates, lost control of the House in the midterm elections. Zach Gibson/Getty Images[9]

Our research looked at campaign fundraising, turnout and vote share for candidates whom Trump endorsed in the 2018 midterm elections as well as their opponents.

While presidents often campaign for and support candidates for the House and Senate in midterm elections, most of that previous activity occurred in person and at the local level[11] rather than on Twitter or some other national platform. Previous presidents also haven’t been nearly as generous in their endorsements as Trump.

President Barack Obama, for instance, endorsed 16 congressional candidates in 2010 and eight candidates in 2014. All those endorsements were given at local events rather than on social media. While Trump has already endorsed 22 candidates leading up to the 2022 election[12], President Joe Biden has endorsed only two[13].

Opponents of Trump-endorsed candidates also benefited from increased mobilization at the polls. 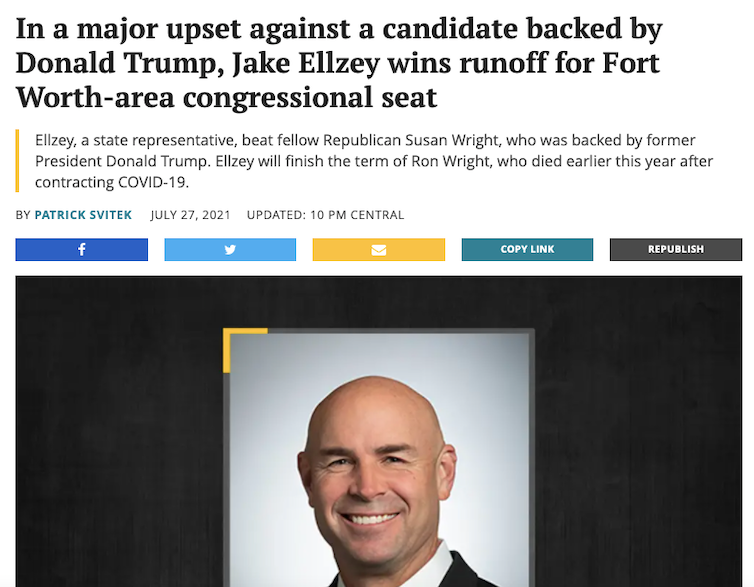 The Texas Tribune headline on a story about Jake Ellzey’s runoff victory over a Trump-backed candidate. Screenshot, Texas Tribune[15]

Without Trump’s endorsement, Republicans likely would have won control of Minnesota’s 7th Congressional District in 2018[16] rather than having to wait until 2020 for Republican Michelle Fischbach to defeat incumbent Democrat Collin Peterson[17]. Likewise, without Trump’s endorsement of New Jersey Rep. Tom MacArthur in 2018[18], our estimates suggest he would have won reelection by about 1.2 percentage points rather than losing by 1.3 percentage points[19].

Ultimately, we found that Trump’s endorsements cost Republicans 16 seats – exactly 20% of the 80 candidates he endorsed. That represented 12 in the House of Representatives and four in the Senate.

Other research has also shown that the engagement of national political figures at the local level appears to mobilize supporters and opponents alike.

Early indications in Trump endorsements for 2022 suggest they may be even more detrimental than in 2018. In addition to the failure of Trump’s endorsement to carry his preferred candidate to office in Texas’s 6th Congressional District recently, opponents have outspent Trump-endorsed candidates this cycle [22].

Given both parties’ anticipation of a hotly contested election in 2022, with control of both the House and Senate likely to be up for grabs, party leaders and candidates may want to carefully evaluate whether they need or want the help of both President Biden and former President Trump on the campaign trail. These endorsements may ultimately prompt more backlash than support.

[Understand what’s going on in Washington. Sign up for The Conversation’s Politics Weekly[23].]