That is the case with the 50th anniversary on July 3[1] of the breakthrough Gough Whitlam visit to China and the July 1 centenary of the founding of the Communist Party of China[2] (CCP).

Australia needs to take stock of a troubled relationship with its dominant trading partner[3] and guarantor of its economic well-being.

The two anniversaries, within a few days of each other, should remind us of both the costs and benefits of a complex relationship, and indeed the challenges and threats.

Chinese President Xi Jinping’s speech marking the July 1 centenary of the founding of the CCP[4] in Shanghai by a group of leftist intellectuals could hardly have been more confrontational.

We will never allow any foreign force to bully, oppress, or subjugate us. Anyone who would attempt to do so will find themselves on a collision course with a great wall of steel forged by over 1.4 billion Chinese people.

By any standards, this was a nationalistic and xenophobic speech designed for domestic consumption. But it was also aimed directly at the United States and its allies, including Australia. It was not an address designed to lower the temperature in China’s increasingly fraught relationships with the outside world.

Read more: The Communist Party claims to have brought prosperity and equality to China. Here's the real impact of its rule[5]

In some ways, the speech marked a throwback to the sort of language that defined China’s relationships with its perceived enemies in an earlier Maoist era. Xi’s words might be dismissed as propaganda, but in an era of aggressive “wolf warrior” Chinese diplomacy, they represent a new stage in how Beijing views what it perceives to be a hostile international environment.

Xi’s speech was effectively a call to arms by a Chinese leader who has emerged as his country’s new emperor.

In that regard, Xi is a successor to Mao Zedong and not Deng Xiaoping, who exercised power mostly behind the scenes. 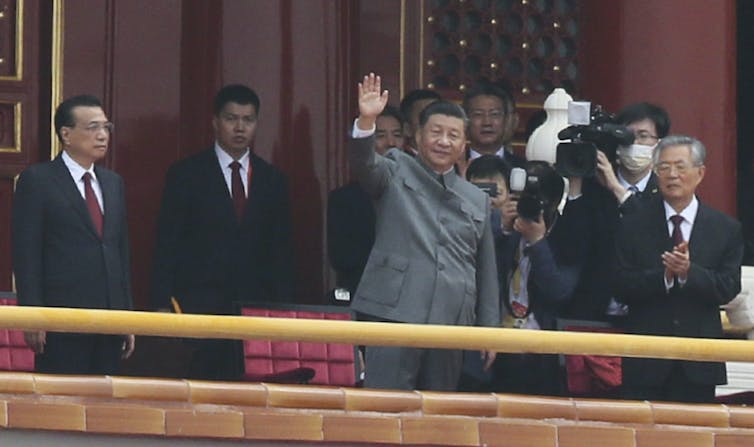 Chinese President Xi Jinping gave a nationalistic speech to mark 100 years of the Communist Party in his country. AAP/AP/Koki Kataoka

Xi might have dressed himself in a colour-coded grey Mao suit identical to that worn by Mao when he proclaimed the People’s Republic on October 1, 1949, but there is not much that is grey about his ambitions for his country.

In one of more pointed sentences in an hour-long speech[6], he said:

The Chinese people are not only good at destroying an old world, but also good at building a new world.

In Xi’s view, China’s Belt and Road[7] thoroughfare does not stop at its frontiers. Whether we like it or not, the Chinese president’s speech marks an aggressive phase in what is clearly perceived by Beijing’s mandarins as a new and more hostile environment.

All this brings us back to the anniversary of the Whitlam outreach to China in 1971[8]. Documents associated with that historic visit, usefully published by The Australian, remind us that in an earlier era Australia was well-served by a politician capable of navigating potentially treacherous diplomatic terrain.

At the time, the opposition leader, still 18 months away from becoming prime minister, went to Beijing to distinguish Labor from a stale Coalition facsimile of US policy.

At the heart of the Whitlam mission was to navigate a way for Australia to establish diplomatic relations with China. He needed to accommodate the vexed Taiwan issue so as not to lay himself open to accusations he had “sold out” the Taiwanese.

Whitlam’s own dispatches[9], published by The Australian, and independent accounts of his exchanges with Premier Zhou Enlai, revealed he more than held his own with China’s master diplomat. These included, principally, the question of Taiwan in what became the blueprint for Australia’s “one China policy”[10].

This stated that “Australia adheres to a one China policy which means we do not recognise Taiwan as a country, but we maintain economic and cultural ties”. This conforms more or less with the American formula published in the Shanghai Communique[11] of February 1972, signed by US President Richard Nixon and Zhou. 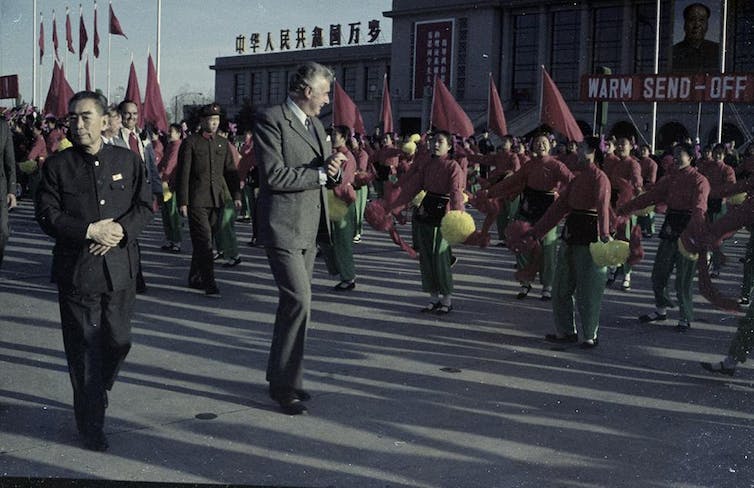 Whitlam and Zhou in China, 1973. National Archives of Australia

Whitlam was lucky politically in the sense that no sooner had then Prime Minister William McMahon berated him for allowing himself to be “played as a fisherman plays a trout[12]” by Zhou, it emerged that even as the opposition leader was in Beijing, US National Security Adviser Henry Kissinger was in the Chinese capital arranging a visit by Nixon.

Whitlam’s timing could hardly have been more advantageous to him politically, and more propitious from an Australian point of view. The newly-elected Whitlam government recognised the “one China” formula as one of its first acts after being elected in December 1972.

This was followed by more than four decades of relatively harmonious relations between Canberra and Beijing, upset on occasions by episodes like the Tiananmen massacre. That was until China began to assert itself more aggressively in its own neighbourhood, and ours.

On the 50th anniversary of Whitlam’s ground-breaking mission to Beijing, it is reasonable to ask how he would have managed relations with a more assertive China in this latest period?

Since Whitlam is no longer with us, the words of Australia’s first ambassador to China[13] and Whitlam’s interpreter on his 1971 China mission might be useful.

In the view of Stephen FitzGerald, Australia needs to find a way to make use of both formal diplomatic channels, and, if necessary, and maybe preferably, “back channels”. This is the realpolitik argument that tends to be ignored in Canberra these days, where China policy is dominated by the national security establishment.

It is a different China but that does not absolve us of the responsibility of trying to engaged with it. It does not matter what you think about the government and, let’s face it, the government in China when Whitlam went in 1971 was not exactly a loveable government. China is now economically bigger, more powerful, but you have to engage with a country like whatever you think of it. This is what Japan, Singapore, South Korea, Vietnam are doing.

Prime Minister Scott Morrison got similar advice last month[14] from Singapore Prime Minister Lee Hsien Loong), whose message was that China’s rise is a fact of life and needs to be managed in a way that avoids confrontation, if possible.

You don’t have to become like them, neither can you hope to make them become like you […] There will be rough spots and you have to deal with that. But deal with them as issues in a partnership which you want to keep going and not issues, which add up to an adversary which you are trying to suppress.

On the anniversary of the Whitlam breakthrough these sentiments may be all very well, but the reasonable question is what the choice is.

Morrison and his foreign policy team should pay particular attention to Whitlam’s emphasis[15] in his conversations with Zhou and in his written accounts of his visit to China to Australia’s own significance as a middle power seeking to play a constructive role in the region.

Read more: Timeline of a broken relationship: how China and Australia went from chilly to barely speaking[16]

This was Whitlam’s way of conveying to the Chinese that Canberra, under his leadership, would seek to define itself and its own interests from those of its American ally. That is, not in contradiction to Washington necessarily, but from Australia’s own middle-power standpoint.

This is what could be described as statecraft, a quality absent from Australian diplomacy these days.

Morrison and his advisers might pay heed to these lessons if he is to get Australia out of the diplomatic cul de sac with China in which it finds itself.

A bit of creative statecraft, along lines suggested by FitzGerald, would not go astray.