When videos of George Floyd’s killing in the US went viral last year, something world-changing happened: a movement fighting against structural injustice became internationally visible.

While statistics in America[1] and Australia[2] have long shown disproportionate numbers of Black deaths in police custody, too often these numbers have been obscured[3] through institutional counter-claims.

But on May 25, 2020, nine minutes and 29 seconds of footage transformed the rules about what makes news news. Floyd’s killing convinced journalists that a story can tackle the root causes of a violent action, and doing so is crucial to understanding the broader framework of violence in which such actions occur.

Those few minutes made it impossible for others to re-write the history of Floyd’s death: his murder as a product of systemic violence was unambiguous[4].

Read more: Pain of police killings ripples outward to traumatize Black people and communities across US[5]

When #BlackLivesMatter (BLM) began, it insisted on a conversation that reached into America’s racist past to explain atrocities in the present.

Its power lies in this deeper engagement with systemic issues, amplified through the capacity of social media to reach wider audiences. One example is citizen support for actions defacing public statues[6] of slave traders and colonisers, which have been recognised as symbols of exclusionary and violent national cultures. 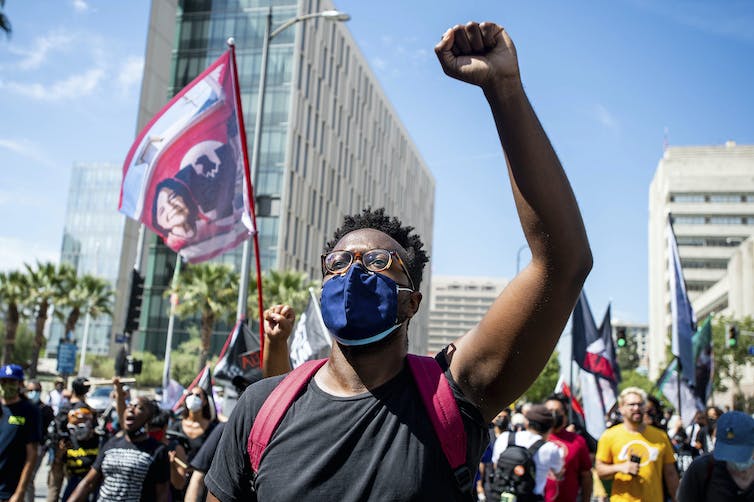 Now, the tenets of BLM are amplifying the struggles of Palestinians and making them more visible and understandable to a global audience.

Just as BLM is forcing a reckoning with systemic racism, there is new attention being paid to the origins of the Palestinians’ struggles: settler-colonialism, asymmetric power relations and racial discrimination[7].

This is central to explaining why public opinion and the media’s reporting on Palestine have shifted profoundly in recent weeks.

This shift can be seen with the #SaveSheikhJarrah campaign on social media, which aimed to bring greater attention to the attempted expulsions of Palestinians from their homes in a neighbourhood in occupied East Jerusalem, Sheikh Jarrah. 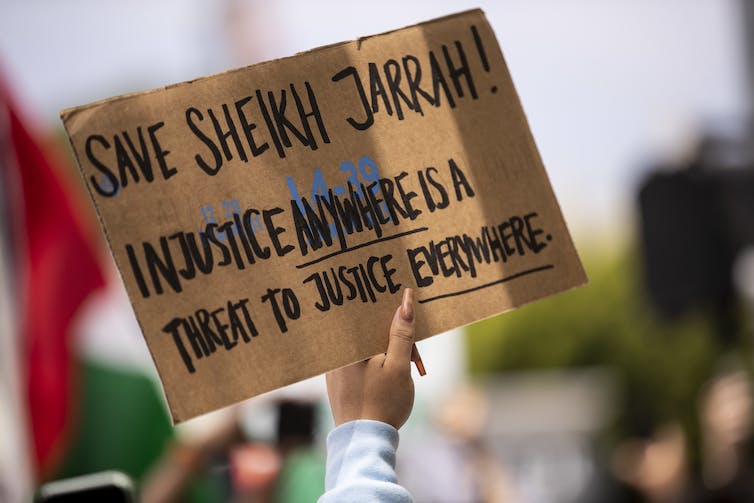 Sheikh Jarrah became a common theme at protests after the Israel-Hamas violence broke out earlier this month. Etienne Laurent/EPA

The campaign created new awareness of the context behind these actions, in part triggered by a widely shared video on social media depicting a Jewish settler telling a Palestinian resident, “If I don’t steal your home someone else will steal it[8]”.

This repudiates Israel’s insistence the broader conflict between Israel and the Palestinians be relegated to the past. The context around the expulsions[9] has become inseparable from the violence itself, making history central to the present crisis.

Read more: Israel-Palestinian violence: why East Jerusalem has become a flashpoint in a decades-old conflict[10]

This new style of messaging has also elevated the voices of people like writer Mohammed El-Kurd, one of the spokespeople for the campaign, who has appeared on major American news outlets[11] describing the issue in terms of settler-colonialism and apartheid. After interviews on CNN and MSBNC, he was detained[12] by Israeli security forces.

El-Kurd previously told his story in the 2012 documentary about Sheikh Jarrah, My Neighbourhood[13], at the age of 11. His articulate explanations and poise in interviews have resonated with audiences, bringing new clarity to millions about the situation Palestinians face.

Through all of this, Israel’s claim of self-defence to explain its actions in Gaza is being challenged by a wider recognition of the government’s violations of international law[14].

Just as BLM has garnered increasing public support beyond the African American community in the past year, a broader alliance of prominent voices is rallying behind the Palestinian cause, as well.

The Black Lives Movement itself has tweeted its support[15] for “Palestinian liberation” and ending settler colonialism in all forms.

And Palestinians are finding support from a wide spectrum of political figures[16], celebrities[17], athletes[18] and other prominent individuals, wising up to the contradiction of progressive politics that exclude Palestine[19].

The alt-rock band Garbage, who rejected calls to cancel shows in Israel in 2016[20], have now used Instagram to support the Palestinians. Another band, Rage Against the Machine, has dismissed criticism from some fans[21] to express its solidarity with Palestinians.

Many prominent figures have avoided wading into politics in the past because they can face a backlash when they do and don’t speak out on issues. But there’s a greater willingness among some to be more vocal on these issues now, a choice that parallels the ethical questions raised by BLM[22].

In a recent Instagram Live post with El-Kurd, actor and model Indya Moore, for instance, talked about the importance of solidarity[23] between African Americans, Palestinians and Indigenous peoples in their mutual struggles against settler-colonialism and systemic racism.

In the UK, soccer players from Manchester United[24] and Leicester City[25] displayed Palestinian flags on the field after matches and [faced not disciplinary action but applause].

This is striking because not long ago, athletes were threatened with punishments[26] for taking political stands such as kneeling during the national anthem before football games in the US. BLM has changed this — it allowed those with a public platform to advocate on behalf of others[27] without fear of recriminations.

The latest ceasefire between Israel and Hamas seems to be holding. But there is a growing recognition ceasefires and calm are not the end of the story in a situation that has dragged on for decades.

The calls for change are continuing. UN Secretary-General Antonio Guterres said after the ceasefire it’s time for the “root causes[28]” of the conflict to be addressed. And Palestinian solidarity rallies[29] have seen huge turnouts[30] since the ceasefire went into effect.

Read more: As the Palestinian minority takes to the streets, Israel is having its own Black Lives Matter moment[31]

All these changes owe a debt to the impact BLM has had on public understanding, combined with the success of First Nations people’s “nothing about us without us” campaign on representation[32]. This has forced the issue in Australia, highlighting the systemic bias of media coverage that ignores Palestinian voices.

However, change will not only require the sustained efforts by Palestinian people themselves, but also through the deep-rooted solidarity[33] they have forged with other marginalised communities. That work continues.