Last weekend, a few hours after the US presidential election was called for Joe Biden, Myanmar voters started lining up for their own chance to decide whether the National League for Democracy (NLD) government, led by Aung San Suu Kyi, would return for a second term.

With 5,643 candidates from 91 parties competing for 1,119 seats, at both the state and federal level, the country’s almost 38 million voters were asked to cast judgment on the last five years of NLD rule.

After three days of vote counting, the ruling party has claimed a huge victory[1], likely extending its resounding wins from the 2015 general election.

Under the military-authored constitution, a quarter of the seats in the national legislature are still reserved for military-appointed representatives, who generally vote as a bloc. The NLD, therefore, needed to win two-thirds of the elected seats to achieve a governing majority.

This requirement was designed by the military to be a high, almost impossible, threshold for any democratically oriented party in such a diverse, multi-ethnic political system. But it looks like the NLD has achieved it again, with ease. 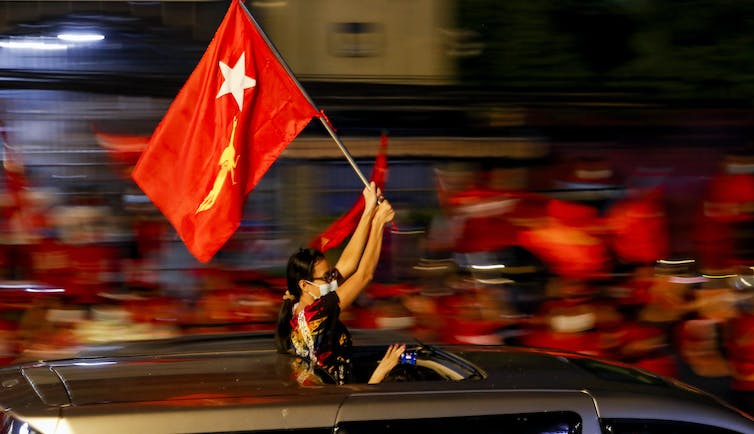 The NLD appears to have displaced the military-backed Union Solidarity and Development Party (USDP) from some of its strongholds in rural areas and southern Mandalay. And its dominance in Yangon and much of the country has been met with jubilation among die-hard supporters, eager to see a further consolidation of the country’s democratic ambitions.

The renewed mandate for the NLD will also be taken by Suu Kyi’s millions of supporters as repudiation of the widespread international backlash against the government for its handling of the Rohingya crisis[2], which saw nearly a million people displaced in 2017.

This led to a genocide case[3] being brought against Myanmar in the International Court of Justice and a dramatic fall from grace for Suu Kyi[4], in particular.

During her first term, Suu Kyi sought to broker a new nationwide peace agreement with the various ethnic minority armed groups, but was frustrated by the entrenched complexities of the country’s borderland politics.

Well-armed militias, some of which draw considerable financial strength from wide-ranging illicit businesses, proved unwilling to accept her government’s claims on their territories.

In some of these areas, the Election Commission cancelled voting in the election, ostensibly due to the ongoing fighting. Northern Rakhine state and also areas of Chin, Shan, Kachin, Kayin and Mon states, and in Bago Region, were all affected by these cancellations.

In Rakhine and Chin states, however, elections were able to be held in NLD strongholds less affected by the conflict between the military and the Buddhist ethnic Rakhine Arakan Army, while voting was cancelled in areas held by ethnic minority parties. 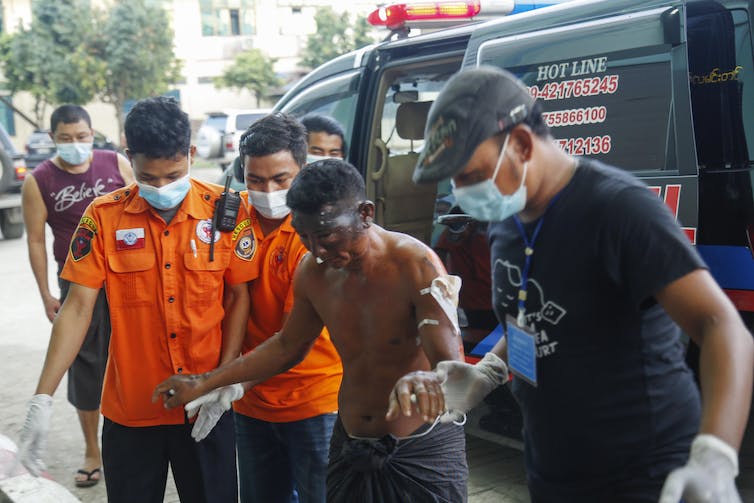 A man injured in an alleged attack by Myanmar forces in Rakhine state in late October. Nyunt Win/EPA

In all, 22 seats[6] in both houses of the national legislature will remain vacant until the conflicts have eased, which may not happen any time soon.

Because the decision to call off the voting in these areas benefited the NLD, it called into question the independence of the Election Commission.

About 1.5 million voters were disenfranchised[7] by the move. There are also further Rohingya in Rakhine state and refugee camps in Bangladesh who have historically been denied citizenship and voting rights.

Human Rights Watch has called the elections[8] “fundamentally flawed”, and many countries have qualified their support for the result by highlighting this disenfranchisement.

Is the military really loosening its grip?

At best, the military will only grudgingly accept the election results, especially since its favoured party, the USDP, performed poorly.

The past five years have seen generally amiable relations between the NLD and the military, even in light of the military’s brutal “clearance operations[9]” of the Muslim-minority Rohingya in Rakhine state in 2017. 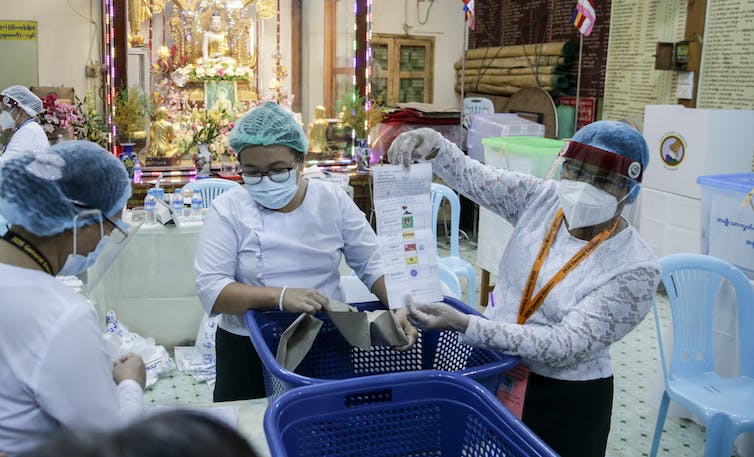 However, in the lead-up to the elections, the commander in chief of the military, Senior General Min Aung Hlaing, released a statement[10] criticising the Election Commission, arguing that

weakness and deficiencies which were never seen in the previous elections are appearing.

He blamed the NLD for the commission’s performance and, the next day, argued the government was making “unacceptable mistakes[11]”, insinuating he might not accept[12] the election result.

Recently, a reputable website run by activists investigating the military was blocked[13] and various opposition parties had their political broadcasts censored when they appeared on state television.

In addition to other restrictions on freedom of speech, the election cancellations, internet shutdowns, disenfranchisement of ethnic minorities and campaign restrictions due to COVID-19 have cast a pall over the vote.

Outlook for the new NLD government

While the treatment of the Rohingya — and Suu Kyi’s defence[14] of the military’s crimes against them — is impossible to accept, foreign governments have little choice but to continue providing support for the newly empowered NLD government.

International pressure should continue to be applied, however, to resolve the Rohingya crisis and protect freedom of speech. 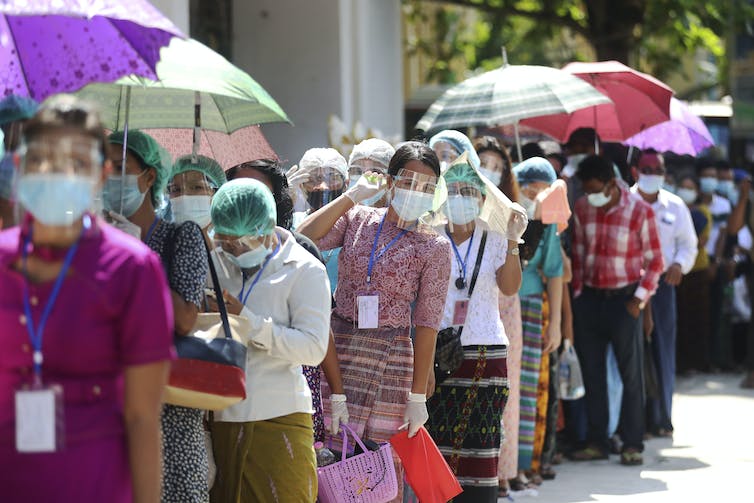 If the military were to step in and take back control from the civilian-led government, this would, in every sense, be a significant backward step for democracy in Myanmar. While we have argued the chances of a coup looked relatively low[15] during the NLD’s first term, recent events have demonstrated the military can always find an excuse to reassert itself at the centre of Myanmar politics.

To avoid further turbulence, and with its fresh mandate, Myanmar’s government will need to quickly concentrate on broad-based economic development and human security. The election result also offers a chance to focus on the peaceful resolution of longstanding conflicts in what remains a tragically divided and impoverished society.