History tells us the month of October in a US presidential election year has a tendency to produce an unforeseen moment that may, or may not, have an impact on the election itself.

William Casey, Ronald Reagan’s campaign manager in 1980, is credited with coining the phrase “October surprise[1]”. It referred to the concern Tehran would announce, on the cusp of the election, the release of American hostages seized after the overthrow of the shah of Iran[2].

In 2020, it would be hard to top an “October surprise” that resulted in a president falling ill with a virus he frequently dismissed and downplayed, then did little about while it ravaged his country.

But if we speculate on a possible additional surprise, some sort of mishap in the Persian Gulf might figure.

This is far from saying an incident in the Gulf is foretold, but recent developments indicate the temperature is rising at a moment when America is preparing to impose unilateral economic sanctions on any party that sells armaments to Iran.

A United Nations arms embargo, imposed in 2006, is set to expire on October 18 under the terms of the Joint Comprehensive Plan of Action[3] (JCPOA), the nuclear deal between Iran and the five permanent members of the Security Council plus Germany. That is in less than a fortnight.

Washington had sought to extend the arms embargo via a UN Security Council resolution, but was rebuffed[4] by, among others, signatories to the JCPOA – Britain, France, Russia and China. 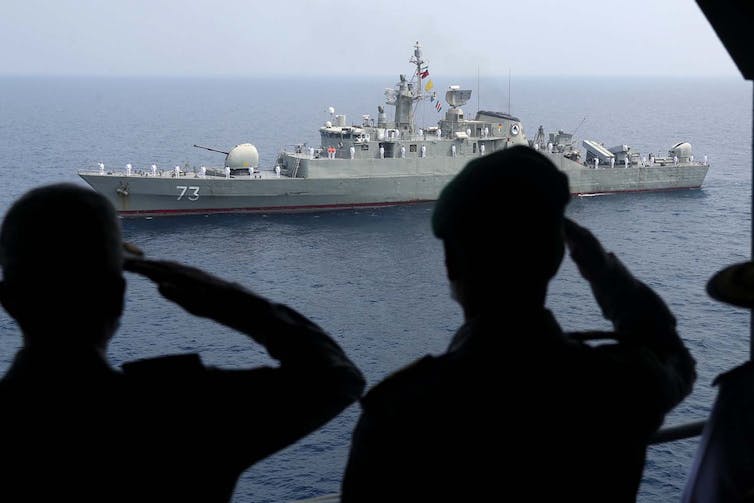 The US now seems likely to fully impose unilateral sanctions on Iran as part of its “maximum pressure[5]” approach to dealing with the Islamic state. It is not clear whether Russia and China will fall into line.

Russia, for example, has extensive military-to-military ties to Iran. Along with China, it has conducted joint naval exercises[6] in the region with Iran’s navy.

Moscow also has its eyes on possible naval base facilities on Iran’s Indian Ocean coast, just as the Russians have used their relationship with Syria to secure a warm water port in the Mediterranean[7].

So the Gulf region is emerging not simply as a flashpoint in US-Iran tensions, but a focus of big-power rivalry in an era in which Russia is seeking to extend its influence deep into the Middle East.

This is driven partly by President Vladimir Putin’s desire to restore Russia’s footprint in the region, after the former Soviet Union was effectively banished but for a few toeholds. It is also partly driven by a perception in Moscow that US domination is eroding.

Read more: Sanctions, a failing economy and coronavirus may cause Iran to change its involvement in Syria[8]

The oil-rich Gulf has become a kaleidoscope of shifting ambitions and alliances. Recent announcements by the United Arab Emirates and Bahrain they were moving towards normalising relations with Israel[9] are significant pieces in this kaleidoscope.

In this mix is Iran’s conspicuous efforts to increase its strategic leverage over the Strait of Hormuz[10] at the entrance to the Gulf. On any day, 20% of the world’s tradeable oil passes through the area.

Read more: Infographic: what is the conflict between the US and Iran about and how is Australia now involved?[11]

The conservative American Enterprise Institute has this to say[12] about Iran’s efforts to strengthen its ability to apply a chokehold to what is arguably the most important and most vulnerable stretch of water globally:

The Islamic Republic is laying the groundwork for greater Iranian influence around the strait […] by expanding its military footprint and building key infrastructure in the area. Tehran’s efforts reflect contingency planning for a larger potential conflict with the US and its Gulf partners since tensions have spiked in recent months.

In the past few years, Iran has invested heavily in its ability to conduct an asymmetric naval campaign against a US naval presence in the region. This includes[13] heavy investment in cruise missile technologies.

Iran is also building a 1,000-kilometre pipeline[14] from oil-producing Bushehr province to its Bandar-e Jask naval base outside the Strait of Hormuz. This would enable it to export oil if tanker traffic through the strait is shut down.

The AEI report concludes that tensions may well rise after the UN arms embargo expires this month as the US seeks to maintain its “maximum pressure” campaign. This would extend to sanctions threats to countries like Russia and China that might be tempted to transfer military technology to Iran.

In all of this, the conflict between Armenia and Azerbaijan[15] is more than a sideshow. Russia wants Iran to stay out of the conflict on its southern boundaries. A price for this might be greater Russian military assistance to Iran as it gears up for possible conflict with the US, Israel and Sunni Arab states.

Princeton University research fellow Hossein Mousavian, a former Iranian ambassador to Germany and nuclear negotiator, speculated in September that if electoral prospects for the Republicans looked bad in the weeks before the November 3 election, Trump might be tempted to stage an “October surprise[16]” in the form of a military operation.

Mousavian reflected a view in Tehran that the US assassination of Iranian Revolutionary Guards Corps commander Qassem Soleimani in January was part of a broader US plan to effect regime change in Iran.

In a region awash with all sorts of conspiracy theories, it matters less whether these theories have merit than that, in a hair-trigger environment, people believe them.

Adding to speculation about a possible game plan that might involve some sort of military confrontation, Washington has vastly increased its firepower in the Gulf.

This is the first time in about a year the US has deployed a carrier battle group in the Gulf at a time when tensions are on the rise.

The US now has enormous firepower in the Gulf on top of its existing deployments of 60,000-80,000 troops[18] in the region. It also has base facilities in Bahrain, headquarters of the Fifth Fleet, and Qatar, which houses the forward headquarters of the US Air Forces Central Command.

None of this is meant to suggest there is anything inevitable, or even likely, about conflict in the Gulf. On the other hand, these are tense moments in an American election season like few others.

In any threat scenario, an incident in the Gulf cannot be discounted.