Justice Ruth Bader Ginsburg’s death[1] has generated an outpouring of grief around the globe. Part of this grief reflects her unparalleled status as a feminist icon and pioneer for women in the legal profession and beyond.

There is already considerable interest in what her departure means for the future of the US Supreme Court, and indeed, the wider political landscape. But to understand that, we must reflect on her legacy.

In 1956, Ginsburg enrolled in Harvard Law School, one of only nine women in her year alongside about 500 men. Reflecting the prevailing mindset of the time, which regarded the study and practise of law as the proper domain of men, the Harvard dean, Erwin Griswold, asked each of the nine women[2] how they could justify taking the place of a man.

Ginsburg’s answer, that she wanted to better understand her husband Marty’s career as a lawyer (he was the year ahead of her at Harvard), belies the reality of the enormous contribution she would make to public life in the subsequent six decades.

The number nine would come to be significant in marking her success in a profession traditionally dominated by men. In 1993, she took her place on the nine-judge Supreme Court as the second woman appointed in its history.

In more recent years, in response to questions about when there will be “enough” women judges, Ginsburg replied there would enough when there were nine women[3] on the Supreme Court. Acknowledging that people are shocked by this response, Ginsburg famously countered,

there’s been nine men, and nobody’s ever raised a question about that.

This exchange points to just how ingrained the idea that judging is men’s work had become.

Long before President Bill Clinton resolved to nominate Ginsburg to the Supreme Court, Ginsburg had established a reputation as an academic (she was the second woman to teach law full-time at Rutgers University and the first woman to become a tenured professor at Columbia Law School). She was also known as a feminist litigator, leading the American Civil Liberties Union’s campaign for gender equality.

Ginsburg’s nomination to the Supreme Court was an uncontroversial appointment. She was regarded as a restrained moderate and was confirmed by the Senate 96 votes to three[4].

Although there were some concerns she was a “radical doctrinaire feminist[5]”, her credentials were bolstered by her record on the United States Court of Appeals for the District of Columbia Circuit (she was appointed by President Jimmy Carter in 1980).

constitutional principle of equal citizenship stature of men and women.

In a series of cases, she sought to establish[8]

sex, like race, is a visible, immutable characteristic bearing no necessary relationship to ability.

keep woman in her place, a place inferior to that occupied by men in our society.

Outside the court — and inside, too

Feminist theorists have sometimes expressed reservations about the extent to which a legal system designed by men to the exclusion of women can ever be fully appropriated to achieve equality for women.

Ginsburg’s legacy in life and law reflects the latter approach. Her faith in the law is reflected in her approach to stand inside the courtroom (literally as a litigator and a judge) to transform existing legal categories. In this way, her approach was reconstructive[11] rather than radical (which is not say that some of her thinking wasn’t radical for its time).

Ginsburg sought to reconstruct sex roles and emphasised men and women alike were diminished by stereotypes based on sex.

Importantly, Ginsburg did not simply pursue formal equality (the idea that equality will be achieved by treating everyone the same). Rather, she advocated for affirmative action as a principle of equality of opportunity[12].

She favoured incremental rather than radical change, reflecting a view that such an approach would minimise the potential for backlash. Her critique of the strategy[13] adopted in the landmark 1973 case Roe v Wade (the case upon which US reproductive rights are based), and her departure from the feminist orthodoxy on this point, reflected her preference for incrementalism. 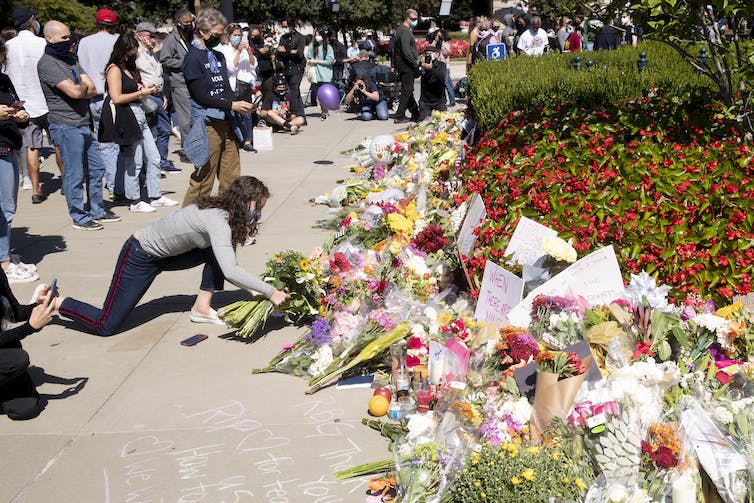 Mourners pay tribute to ‘RBG’ outside the US Supreme Court in Washington, DC. Michael Reynolds/AAP/EPA

Legacy on the bench

Ginsburg’s jurisprudential contributions on the Supreme Court continued the legacy she began in the 1970s.

One of her most significant majority opinions[14] in 1996 required the Virginia Military Institute to admit women. Importantly, this was because it had not been able to provide “exceedingly persuasive justification” for making distinctions on the basis of sex. Although this standard fell short of the “strict scrutiny test” required in cases involving classifications on the basis of race, it nonetheless entrenched an important equality principle.

But it was perhaps her judicial dissents, sometimes delivered blisteringly[15] in the years where she was the lone woman on the bench (prior to President Barack Obama’s appointment of Sonia Sotomayor in 2009[16] and Elena Kagan in 2010[17]), that seem to have really captured the wider public imagination and catapulted her into the zeitgeist.

It was in the wake of her 2013 dissent in a case about the Voting Rights Act[18] that she reached the status of a global feminist icon. A Tumblr[19] account was established in her honour, giving her the nickname “Notorious RBG” (a title drawn from the rapper Biggie Smalls’ nickname Notorious B.I.G). A 2018 documentary RBG [20] chronicled her legacy and status as a cultural icon, and a 2018 motion picture On the Basis of Sex[21] depicted her early life and cases.

Ginsburg’s celebrity certainly expanded during her time on the court — but this is not to say to it has been without controversy or critique, even from more liberal or progressive sources.

She has been criticised for her decisions (for example, a particular decision about Native Americans and sovereignty[22]), for her comments about race and national anthem protests[23], and for being too partisan — particularly in her criticism of President Donald Trump. (She called him a “faker” and later apologised[24].)

Did Ginsburg’s feminism or celebrity undermine her legitimacy as a judge? Questions of judicial legacy and legitimacy are complex and inevitably shaped by institutional, political and legal norms. Importantly, her contributions as a lawyer and a judge have done much to demonstrate how legal rules and approaches previously regarded as neutral and objective in reality reflected a masculine view of the world.

Over 25 years ago, Ginsburg expressed her aspiration[25] that women would be appointed to the Supreme Court with increased regularity:

Indeed, in my lifetime, I expect to see three, four, perhaps even more women on the High Court Bench, women not shaped from the same mold but of different complexions. Yes, there are miles in front, but what distance we have travelled from the day President Thomas Jefferson told his secretary of state: ‘The appointment of women to [public] office is an innovation for which the public is not prepared.’

That Ginsburg came to share the Supreme Court with two women, Kagan and Sotomayor, must have given her some hope that women’s access to places “where decisions are being made” was at least tentatively secure, even if hard-won feminist gains sometimes felt tenuous at best.

Ginsburg was a trailblazer in every aspect of her life and career. The women who follow her benefit from a legacy that powerfully re-imagined what it means to be a lawyer and a judge in a legal system that had been made in men’s image.