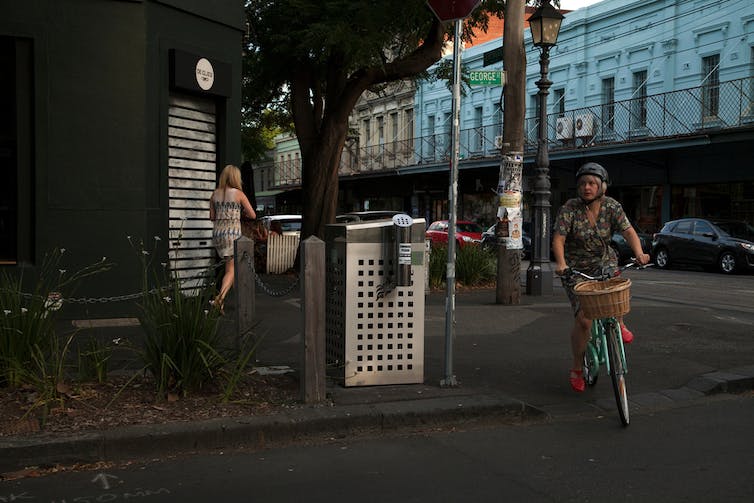 Cycling is healthy and sustainable, but only 1.7%[1] of trips in Melbourne are made by bike. Car use has soared[2] since lockdowns were lifted.

We surveyed over 4,000 Victorians and found more than three-quarters are interested in riding a bike, but only in infrastructure that separates people from cars (such as off-road paths or protected bike lanes).

Our study, published in the Journal of Transport and Health[3], found high levels of interest in bike riding in groups with traditionally lower participation, including women and people living in outer-urban fringe areas.

However, these areas tend to have less access to safe, protective and supportive infrastructure than their higher socioeconomic counterparts.

Cycling is healthy and sustainable, but only 1.7% of trips in Melbourne are made by bike. TRACEY NEARMY/AAP

Previous research[5] has shown that how unsafe someone feels when riding a bicycle – particularly in the presence of motor vehicle traffic – is the key barrier to cycling.

Many people are interested in riding, but only in paths separate from cars. DAN PELED/AAP Image

Bike infrastructure must work for women, as well as men

For every woman that rides a bike in Melbourne, there are two men[8] doing the same.

Despite lower participation, our study showed two-thirds of women are interested in riding a bike, and over half own a bike. Research suggests women are more likely than men to feel vulnerable to harassment by drivers[9] when riding, may need more storage[10] space than a bike usually provides, and may have more care-giving responsibilities[11] than men. Differing perceptions[12] of risk are also a factor.

Women have different infrastructure preferences to men, with a high preference for bike paths or lanes physically separated from motor vehicle traffic[13].

Taken together, these factors contribute to a pattern where many city bike paths and lanes are designed for the needs and confidence levels of male cyclists[14].

Common to many cities in Australia and around the world is what’s known as the “radial planning fallacy[15]”, where transport systems are designed to optimise trips from outer-urban areas to city centres or businesses – rather than to facilitate local trips.

The majority of protected bike paths or lanes in Melbourne are radial in design, with a lack of connectivity between existing paths.

This kind of planning does not support the needs of many actual or aspiring cyclists, particularly women who tend to have more varied trips[16] around places such as school, local shops and other locations close to home.

We must plan bike infrastructure that supports the needs of women, as well as men. Shutterstock

Outer suburbs are losing out

Despite lower participation, we found that interest in bike riding is high in the outer urban fringe areas of Melbourne.

These areas also have the lowest level of access to safe and comfortable bike infrastructure[17].

People who are inexperienced or new to bike riding prefer[18] bike paths or lanes that are physically separated from motor vehicle traffic.

But a lack of infrastructure dedicated to active transport, coupled with longer distances to essential services, means people living in outer-suburbs are often required to drive long distances.

Too much existing bike infrastructure is simply a strip of white paint. CHRISTOPHER SAMUEL/AAP

To address these health and transport inequities, it’s essential we plan and build protected and connected bike infrastructure across Melbourne, including new urban growth areas.

Read more: What Australia can learn from bicycle-friendly cities overseas[20]