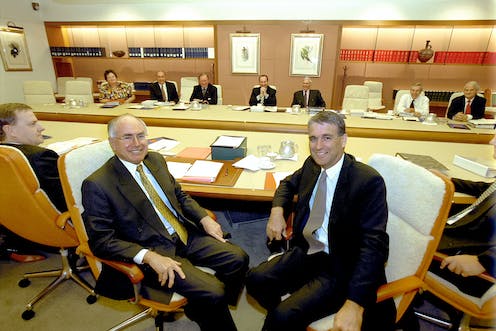 2001 was the final year of the Howard government’s second term in office.

It began with the government on the political defensive, doing poorly in opinion polls, but ended with a third successive victory in November.

Two epic political developments – the “Tampa crisis[1]”, in which the government ordered Australian troops to board a foreign vessel carrying rescued asylum seekers to stop them landing on Australian soil, and the September 11 terrorist attacks in the United States – were decisive in the government’s re-election.

Tampa and September 11 remained influential factors in Australian politics for the next 20 years. These events drove a decisive turn towards “securitisation” in political discourse and public policy.

Read more: Issues that swung elections: Tampa and the national security election of 2001[2]

In a political context, securitisation refers to the systematic transformation of regular public policy matters into security issues. This in turn is used to justify unusual measures as necessary to the survival of the state and safety of its citizens.

In 2001, Australia pivoted into this new securitised mindset. It was partly driven by events but also, to a significant extent, by political choice.

This pivot is evident in the 2001 Cabinet papers, released today by the National Archives of Australia. In them, domestic submissions, free from a securitisation mindset, dominate until Tampa and the September 11 attacks occur.

The September 11 2001 terrorist attacks, along with the Tampa crisis, would reshape Australian politics for the next two decades. Richard Drew/AP/AAP

The papers show the government developing possible responses to sharply rising asylum-seeker arrivals by sea during the first half of 2001.

This culminated in the so-called “Pacific Solution[3]” of offshore detention, which unfolded over the last week of August.

Strong support for the Beazley-led Labor opposition eroded under the combined weight of the Tampa and the September 11 attacks.

All of this meant the 2001 “khaki election” was conducted against the backdrop of perceived external threat and military action abroad. The government, in electoral trouble earlier in the year, was returned with effectively the same majority after allowing for a two-seat expansion of the House of Representatives.

Strong support for the Labor opposition led by Kim Beazley quickly eroded under the combined weight of Tampa and the September 11 attacks. National Archives of Australia

Five of the 2001 Cabinet papers directly arise in response to the September 11 attacks.

One of these – “Options for defence enhancement for domestic security”, dated October 2 2001 – is historically significant as a window into a government grappling with a sudden shift in perceived domestic security needs. It also addresses questions about the continuing appropriateness of strategic fundamentals decided on just a year earlier in the 2000 Defence White Paper[4].

Interestingly, there is no “Pacific Solution” Cabinet submission nor decision in the 2001 release.

While asylum-seeker policy and Islamic terrorism dominate memories of federal politics in 2001, they do not dominate the 2001 Cabinet papers.

Two-thirds of a year elapsed before September 11 marked the beginning of the new securitised era in Australian and world politics.

Most of the 2001 papers are concerned with domestic policy across a wide range of areas, including many of continuing concern – notably climate change.

They show the Howard government had a far more nuanced view on climate change and its significance than any Coalition government since. These papers, along with last year’s, provide context for the Coalition’s proposal of a carbon trading scheme in the run-up to the 2007 election.

Read more: Cabinet papers 2000: the Coalition before climate denialism, but on the path to offshore detention[5]

We can see a coalition Cabinet not yet captured by resource sector interests, expressly constraining its resources minister from the untrammelled promotion of those interests.

The government is seen operating in once familiar co-operative frameworks for national actions with the states.

The 2001 papers reveal a far more nuanced view of climate change than any Coalition government since. National Archives of Australia

In preparation for a COAG meeting in June, for example, Cabinet in May settled agenda items including a national energy policy framework, a national action plan on salinity, and a proposed ban on human cloning.

The Reconciliation framework was also on the COAG agenda. Cabinet noted that “some state and territory governments had been actively campaign(ing) for a national apology to indigenous Australians”. Cabinet opposed such an apology.

Another paper states the government’s ongoing opposition to a treaty with Indigenous Australians.

Against the backdrop of the current COVID-19 pandemic, it is interesting to note the government sought state agreement through COAG on:

continued high priority review and revision of national whole-of-government frameworks for the management of a major emergency animal disease outbreak, such as FMD (foot and mouth disease), to be co-ordinated by COAG Senior Officials.

Population policy is another interesting focus in the papers.

The then immigration and multicultural affairs minister, Philip Ruddock, had for some time favoured a higher profile for government-led population policy discussions in Australia. In pursuit of this he meshed discussion of long-term challenges, including an ageing population and declining fertility, with related issues of skilled migration, the workforce participation rate of women and older Australians, and the environmental impact of overall population levels.

While Ruddock was a population policy enthusiast, ministerial colleagues were concerned about the political sensitivities of such discussions. Cabinet decided at the beginning of 2001

to continue to resist the development of a formal population policy or the setting of long-term population targets.

The Coalition’s relative electoral success federally has its roots in political lessons flowing from this pivotal year in contemporary Australian politics. It has continued deriving enormous political dividends from them, while its opponents struggle to come to grips with and negate the potent impact of wedge politics.

Under the Howard government, security and immigration policy were the main, and interrelated, sites for its use.

The consequences are ongoing.