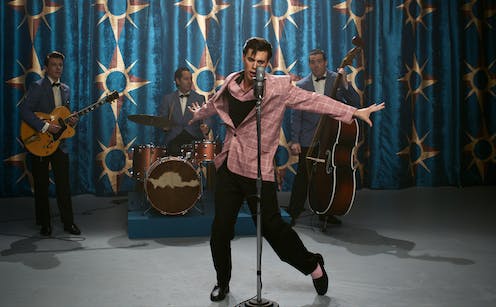 A new Baz Luhrmann film caused a stir[1] this year at Cannes – again.

In 2001, Moulin Rouge opened the grandest of all film festivals with the grandest of modern musical extravaganzas. The film garnered praise, disdain and bewilderment in equal measure, but marked the festival’s continuing love affair with the cinema of Lurhmann.

The next fanfare was Luhrmann’s quixotic imagining of F. Scott Fitzgerald’s The Great Gatsby[2] (2013), again opening the festival, again to a somewhat mixed critical response. Critics seemed to love and hate Gatsby (and Luhrmann) in equal measure.

But what do critics matter? I was at one of the early Australian screenings of The Great Gatsby in Dendy Newtown and was transfixed less by the film than the entire row of seats immediately in front of me comprised of teenagers in tuxedos, tails and the risqué couture of the 1920s flapper.

I marked the so-called era of excess with a shared bottle of wine; these high schoolers had imported an entire aesthetic mode of expression.

Gatsby took[3] US$380 million worldwide on a US$100 million budget, generated a chart-topping contemporary soundtrack and prompted millions of spectators to reread Fitzgerald’s novel.

Read more: The Great Gatsby: death by glitter or a thought-provoking spectacle?[4]

The new Baz Luhrmann spectacular Elvis premiered in Cannes and opens this week in Australia.

The critical world is again anticipating what will come of Luhrmann’s signature self-indulgence, inflated budget and artistic grandiosity. Peter Bradshaw’s early review[5] opens with: “Baz Luhrmann has given us another pointless explosion of super-spangly sparkles in celluloid form.”

To be honest, I agree with everything Bradshaw wishes to signify in his dismissive statement. The film is super-spangly (as was Elvis, as is the film’s director). It is explosive in its audio-visual kinetics. It is also, time and again, narratively unhinged.

And yet, midway into the first act, seeing that performance of Austin Butler’s Hayride[6], with the camera orchestrating shot reverse shot encounters between adoring, orgasmic women (and a young man singled out) and Elvis’s crotch (I kid you not), I realised, in spite of my reservations about an Elvis biopic years in the making, I had fallen in love with the film.

An auteur in Hollywood

There lies the critical rub and the tension that makes Luhrmann so fascinating as a contemporary film auteur. I valued the film precisely for what other critics have lambasted: its fluid, playful, elaborate pointlessness.

My question to Bradshaw and other like-minded critics of Elvis is: should cinema be pointed? Or, perhaps more provocatively, we could ask: must a work of art have a point?

Luhrmann is an iconoclast. His version of Elvis, Elvis’s “story” (for whatever that signifies) and Elvis’s music was never going to be a straight-ahead history.

But he is an iconoclast who nonetheless must make money for his investors.

These investors – the heart of the American studio filmmaking system – are fickle and changeable. Careers are made and extinguished on a single film. How, then, does iconoclasm subsist within an industry that enforces homogeneity to guarantee a financial return?

Each of Luhrmann’s Hollywood films wishes to reconstruct history as audio-visual spectacle. Luhrmann’s films are the past in vibrant, saturated colour, flowing in Catherine Martin’s creative costume design. The films are anachronism in sound and music composition.

Luhrmann’s history is historical projection. These histories are his idiosyncratic fantasies.

This is precisely how Luhrmann sets about the task of making Elvis meaningful now.

He begins with a simple premise: the traditional biopic genre, strait-jacketed by our desire for fidelity to historical truth, is not adequate to the task of putting Elvis on a cinematic screen.

The genre is also not adequate to the task of turning Elvis into a financial commodity for export on screens, red carpets, music video montage pieces, fashion houses and digital streaming platforms.

Luhrmann’s reconstruction of the genre is, to use Bradshaw’s terminology, an aesthetic explosion.

The film is an artistic triumph because it is less about Elvis the historical figure than Elvis as a social, cultural, political and sexual phenomenon.

Luhrmann uses his mastery of film to take what could have been a flaccid history and make it into a full-blooded, euphoric, eroticised audio-visual spectacle.

Austin Butler’s chameleon-like turn is less a screen performance than an embodied imagining of what Elvis represents as a cultural signifier, realised in a glorious moment in which Luhrmann cuts between Butler’s and Elvis’ failing bodies in a 1977 performance[8] of Unchained Melody.

I’m convinced Luhrmann’s only genuine fidelity in this film is to Elvis as a cross-cultural, historically fluid body: in all its eroticism, grandiosity and tragic disassembling.