Fiji now heads the grim list[1] of Pacific nations[2] counting their dead from coronavirus, having just passed Papua New Guinea’s toll. So far, 254 Fijians have died from the disease, and the nation is recording 1,000 new cases every day.

The Delta variant has drastically altered the situation for the Pacific. It was first detected in Fiji in April and spread quickly[4]. This is despite Fiji being the first Pacific nation[5] to receive AstraZeneca vaccines through the COVAX program in March.

The Bainimarama government is being blamed for not executing a rapid mass vaccination campaign and not sufficiently locking down[6] the nation. The other contagion accompanying coronavirus around the globe – misinformation[7] – has also been blamed for widespread Fijian vaccine[8] reluctance.

Now Fiji’s government is desperately fighting to contain the outbreak. Fears[9] are circulating that it is facing a repeat of the 1875 measles epidemic[10] that killed about 40,000 people. 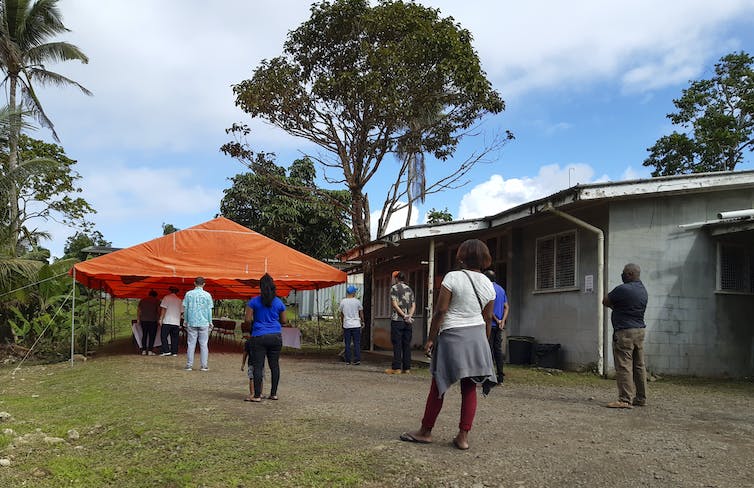 The Fijian government is desperately trying to contain its COVID outbreak. Aileen Torres-Bennett/AP/AAP

A mandatory vaccination order[11] was issued on July 8 to all government workers. Non-compliance will be punished by job loss. Currently, 25%[12] of Fijians are fully vaccinated. The government has also expanded curfews[13] for the main island and the outbreak epicentre, Viti Levu.

Beyond the urgency of saving lives and halting the disease’s spread, Fiji is also economically[14] devastated by the pandemic. Most Pacific borders were closed by March 2020, instantly cutting the economic lifeblood of tourism.

Being a Pacific hub, Fiji is a dangerous launching point for the Delta strain to other nations. In early July, for example, nine travellers[15] from Fiji arrived in New Zealand infected with COVID-19.

Read more: The Pacific went a year without COVID. Now, it's all under threat[16]

The Solomons and Vanuatu

Repatriating students and their families from Fiji remains a serious concern for both the Solomon Islands[17] and Vanuatu[18]. The Solomons[19] has decided to repatriate some, but most will remain in Fiji until more vaccines have been administered at home (currently under 3%[20] are fully vaccinated[21]).

Vanuatu’s low vaccination[22] rate of under 8%[23] also makes the return of students a perilous[24] decision for lawmakers. Like Fiji, it is now considering a “no jab, no job[25]” policy.

In addition to the risks posed by Fiji, both nations have had numerous scares[26] from infected shipping crews[27]. All Pacific nations must contend with this border vulnerability.

The havoc unfolding in Fiji is bad news for Papua New Guinea. Though PNG recorded its first COVID-19 case in March 2020[28], it was not until one year later[29] that a health crisis erupted.

PNG’s official toll[30] is almost certainly the tip of the iceberg, as COVID testing was scaled back once vaccinations became the main focus[31] for health authorities. And this was before PNG’s first confirmed case of the Delta variant[32] was announced on July 16.

Again, mass vaccinations are PNG’s only defence. Vaccine donations have arrived from various sources, but only about 1%[33] of the population is fully vaccinated according to available government reporting.

Australia has already donated thousands of doses to PNG and other Pacific nations, but with a reported stockpile of 3 million[34] unused doses of AstraZeneca, the Pacific nations would be obvious places to send these. 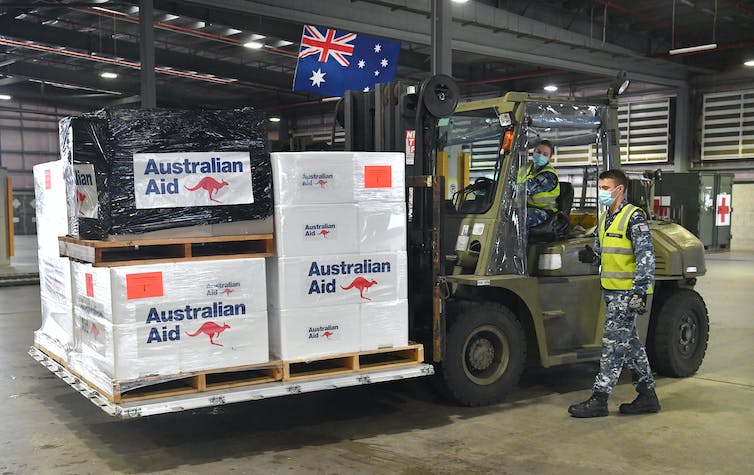 Australia has donated vaccines to its neighbour PNG, but across the Pacific much more help is needed. Darren England/AP/AAP

Over PNG’s border with Indonesia, COVID-19’s spread is clashing with another surge in political unrest. Tensions had been building again following the rebel killing of an Indonesian general[35] in April. Then Indonesian legislators voted on July 17 to again controversially reshape Papua[36].

Papuan activists are concerned vaccine distribution will be withheld from rebel populations as an Indonesian tactic to further weaken them. West Papua leader Benny Wenda has called on the West to vaccinate Indigenous Papuans because COVID is an additional existential threat to his people. Wenda’s fears may have foundation. The Papua province has the lowest vaccination[40] rates in Indonesia, at about 6%.

Elsewhere in the Pacific

The news is better in other parts of the Pacific. Numerous Pacific nations, including Tonga[41], Palau[42], Federated States of Micronesia[43] and American Samoa[44], have not recorded any confirmed COVID cases. Kiribati[45] recently reported its first case, matching Samoa[46]’s record to date.

The natural isolation of many Pacific populations will protect them for only so long. Analysis of the 1918 influenza[47] epidemic shows outbreaks persisted in the Pacific through to 1921. When it reached the phosphate-mining island of Nauru[48] in 1920, it killed 18% of the local populace.

A century later, Nauru has vaccinated all its adults against COVID and claims this as a “world record[49]”.

Niue[50] has also achieved herd immunity thanks to New Zealand’s swift donation of Pfizer vaccines, a process now being repeated in Tokelau[51]. The Cook Islands[52], with its more complex geography, nonetheless has a high vaccination rate (55%) sustaining the travel bubble[53] with New Zealand that opened in May 2021.

In the US territory of Guam, where the first COVID death[54] in the Pacific was recorded in March 2020, tourism and vaccinations have merged in a different way. Travellers from Taiwan began taking “vacation and vaccination[55]” trips from early July. While Guam recently reached 80% vaccinated[56], it also recorded its 142nd death[57] attributed to the pandemic.

Like Guam, Palau[58] got fast and adequate supplies of vaccines because of its freely associated[59] relationship with the US. This has shielded them from the pandemic with near herd immunity.

Yet Hawaii is seeing the same recent surge as is afflicting mainland US. The Delta variant[60] and July 4[61] parties have combined to unleash what President Joe Biden called a “pandemic of the unvaccinated[62]”. 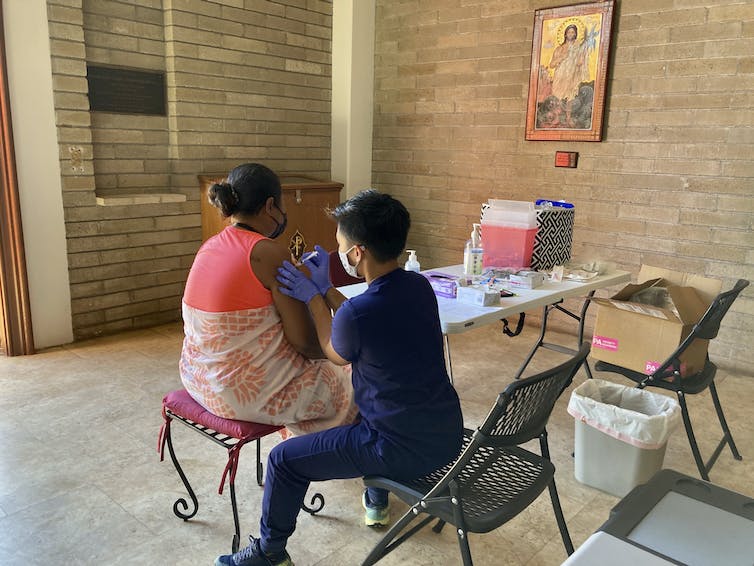 Hawaii is now seeing the same surge in cases in the past month as has the US mainland. Jennifer Sinco Kelleher/AP/AAP

This latest surge, like earlier ones, disproportionately[63] impacts Native Hawaiians and Pacific Islander[64] communities living in the US by a substantial degree.

COVID has devastated the US-based Marshall Islands community, especially in Arkansas[65], so alarming health officials they investigated[66] it in 2020.

French Polynesia has grappled with the costs of an operating tourist industry since early 2020. Twice, borders have been closed when cases numbers and deaths rose, and then reopened[67]. Now President Edouard Fritch[68] is calling for compulsory vaccinations.

In New Caledonia, COVID has complicated[69] a fractious political situation as it heads towards its final referendum[70] on independence from France in December. In February 2021, a budget crisis exacerbated by COVID’s economic impact led to the collapse of the government[71]. In July, the territory elected its first Kanak pro-independence leader[72] in 40 years, increasing the likelihood of a vote to break with France.

Read more: Samoa’s first female leader has made history — now she faces a challenging future at home and abroad[73]

Samoa has seen the same economic and social stresses due to COVID as elsewhere in the region. Many saw the introduction[74] and extension of emergency powers by the now-defeated government (despite having only one case and no deaths[75]) as another move towards autocracy[76]. The political crisis has been a drag on all Samoan government functions, not least a sluggish vaccine rollout[77].

In another disaster, COVID pushes climate change to the backburner

Every Pacific nation faces its own challenges due to COVID. The region also has shared ones. The Pacific Islands Forum[78] lost one-third of its members in February 2021 in part because meetings were held virtually. The fracturing of this regional body comes at a bad moment, not least in the fight against climate change.

Until COVID, this was the immediate existential crisis facing the region. Now activist worry climate change initiatives[79] have stalled at the long-term peril of the region. As the Federated States of Micronesia president has argued, “economies can die and be revived but human beings cannot[80]”. Whether this also applies to the planet remains to be seen.