News the army’s Lieutenant General John “JJ” Frewen has been picked to lead a new COVID-19 vaccination task force[1] has prompted fresh discussion of the defence force’s role in Australia.

Frewen, already the commander of the Australian Defence Force (ADF) COVID-19 task force, will now also direct a “military-style scale up phase of the beleaguered vaccination rollout”, as one media report[2] put it.

As someone whose life’s work has been the study of the ADF, my first thought when hearing the news was: Frewen is a good pick, in many ways. He is an exceptionally capable officer, and I have no doubt he will get the job done.

But I have broader concerns about Australia’s growing tendency to call in the defence force to deal with crises outside its usual remit. These are crises that could or should be dealt with by well-resourced civilian government agencies and institutions.

It risks stretching even thinner the already constrained capacity of our relatively small army. It also speaks to a failure to set up Australian society to respond robustly for the likely challenges of the future.

A good pick, but is this the job of the defence force?

Frewen has considerable operational and managerial experience in the context of defence. He had a leading role as part of the police-led, multi-agency intervention in the Solomon Islands in 2003[3], he helped pick up the pieces in Rwanda after the 1994 genocide, and he has commanded a combat brigade in Darwin and our deployed operational forces in the Middle East. He has also been, for a while, the acting director general of the Australian Signals Directorate.

He is a man for all seasons; talented, capable, urbane, personable, smart and hard not to like. So it is completely understandable if the prime minister has thought, “I like this guy and I think he’d do a good job.”

And he’s right. Frewen will get on with the job and will make it work.

But is this what we should do with our defence force? Isn’t a vaccine rollout something we should be resourcing our state-based emergency response agencies to do better?

Read more: Australia's latest military commitment should spark assessment of how well we use our defence forces[4]

In recent years, we have expected the defence force to respond to crisis after crisis, rather than properly resourcing civilian-led government or community agencies to perform these tasks.

The federal government has defaulted to the one federal implement it completely controls, which generally exercises its agency with political aplomb. (Yes, the Brereton report[5] revealed problems but, by and large, the defence force remains very well regarded in the community.)

We keep telling ourselves this latest crisis is an aberration. But it’s the new normal. That’s my concern. If it’s not pandemics, it’s fires, floods, pestilence — or all of the above concurrently.

And if what pundits are saying is correct, these challenges are not going away, as I’ve argued in a recent Geostrategic SWOT analysis for Australia[6] (SWOT stands for strengths, weaknesses, opportunities, threats).

We may be able to lean on the defence force to help manage these challenges consecutively. But what happens when, as predicted, they start to happen at the same time? 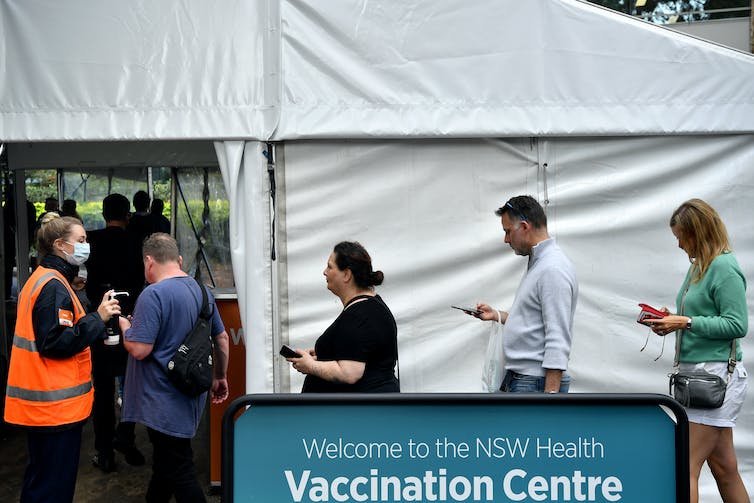 A new vaccination taskforce has been announced. AAP Image/Joel Carrett

A comparatively small force taking on more and more

The ADF is, in reality, a boutique force. It’s smaller than many realise — and very expensive to run. It’s only a fraction the size of the defence force in Indonesia — let alone China, India and South Korea. Comparatively, it is tiny, yet it is being asked to take on more and more.

It is structured for the days when the US was in charge of international affairs and only ever needed niche contributions from Australia[7].

But now, the ADF is being expected to respond to large and complex disasters which are overlapping more than ever.

We are increasingly getting the defence force to focus on environmental issues (a pandemic counts as one), which leaves less time for what it’s actually meant to do — prepare and conduct operations offshore in defence of Australia and its interests.

And in the meantime, we are not properly resourcing agencies like the Australian Border Force, Australian aid, the Department of Foreign Affairs and Trade, health agencies, the state emergency services, the rural fire services, state and federal police and so on to respond to issues of regional significance. These include pandemics, natural disasters, people smuggling and terrorism. 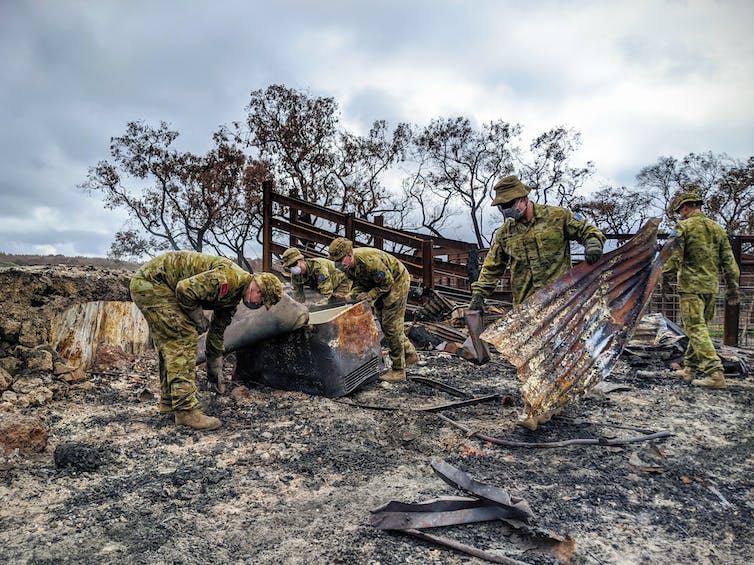 The defence force is increasingly asked to respond to disasters. PA/AUSTRALIAN DEPARTMENT OF DEFENCE HANDOUT/COMMONWEALTH OF AUSTRALIA

Brilliant at logistics but we must plan better

It is true, as some have pointed out[8], the defence force is excellent at logistics. But so are a number of commercial companies and they may be able to help in something like a vaccine rollout at a fraction of the price (the defence force is surprisingly expensive).

For now, we may not have any really viable alternatives to do the vaccine rollout quickly. And I’m not saying the ADF’s involvement is a terrible idea. But we should have been thinking about this before now.

One idea would be to establish a scheme for national and community service[9], incentivising young Australians to volunteer in local, state and federal agency crisis responses.

The selection of Frewen to head this ramped-up vaccine rollout is, in many ways, no surprise. But as respectable, capable, honourable and competent as he is, his selection speaks to a lack of thinking about the longer term, corrosive ramifications of expecting the defence force to do ever more.

Read more: Should the ADF take a bigger role in bushfires and other domestic emergencies? The answer isn't so easy[10]