The federal government’s suspension of flights from India leaves some 9,000 Australian citizens stranded, 650 of whom are registered[1] as financially or medically vulnerable. They are trapped in a country where hospitals are running out of oxygen, and where the number of new infections is more than 300,000[2] per day.

Along with the unfolding humanitarian disaster[3], the suspension of flights is yet another example of the ongoing dysfunction of Australia’s repatriation system.

As I have explained in my recent research[4], the pandemic has created a temporary, but desperate[5] minority in Australia. These are the roughly 34,000[6] citizens abroad who are currently registered with the Department of Foreign Affairs as wanting help[7] to get home, though the true number is likely far higher.

Australia continues to have a large diaspora[8] living and working abroad, who cannot register with the government until they have attempted to return home of their own accord.

So how did we end up here?

A consistent theme of Australia’s response to COVID-19 — including leaks in hotel quarantine[9] — has been to blame individuals (be they guards or travellers), rather than the way the system[10] is designed.

At the time of writing, Australia’s hotel quarantine programs have “leaked” 16 times. Many have come from poor ventilation and inadequate protocol for personal protective equipment. Experts say more must be done to prevent aerosol transmission[11] of the virus.

When leaks have occurred, the political instinct of Australian governments has been to reduce the caps on overseas arrivals and — increasingly — point the finger[12] at members of the public who have left Australia on federal government-approved exemptions.

The West Australian government’s response to its most recent leak is a useful case study. Despite warnings in March[13] the Mercure hotel was “high risk”, it was not pulled from operation. Amid Premier Mark McGowan’s criticism[14] of people travelling to India for family events, Western Australia has now halved its cap.

But a defective system not designed to accommodate aerosol transmission[15] will continue to leak even with the reduced cap. It will merely do so at a lower rate.

Banning flights from India follows this logic. Australian governments have argued [16] it is necessary to reduce the number of positive cases in quarantine. This implicitly acknowledges fundamental flaws in Australia’s hotel quarantine programs.

No constitutional right to return

Australians abroad have limited protection in this situation.

Australia is one of the only liberal democracies in the world without a bill of rights. Minority rights were explicitly rejected during the constitutional conventions during the 1890s, with a view[17] that minorities

must trust to the sense of justice of the majority.

The lack of a rights framework creates particular problems during crises, when popular responses emerge in an atmosphere of fear and urgency. For a majority unaffected by travel bans, halving caps and suspending flights is an easy solution in the face of government failures. It also appeals to Australia’s cultural and historical reflexes regarding border control[18].

It also means Australia doesn’t necessarily prioritise its citizens or residents amongst arrivals. In February, only 44% of Australian arrivals were citizens[19]. Victoria has now proposed introducing a separate stream for “economic cohorts[20]”, even as it insists members of the public should only be allowed to leave and return for “genuinely urgent or compassionate reasons[21]”.

To make matters more complicated (and tougher for Australians trying to get home), we have a federal framework for quarantine[22]. Quarantine is a “concurrent legislative power[23]”. This means the federal government may assume responsibility for running quarantine, or it may leave it to the states. Ideally, the federal and state governments would work together and pool resources based on their respective strengths to maximise capacity and safety. 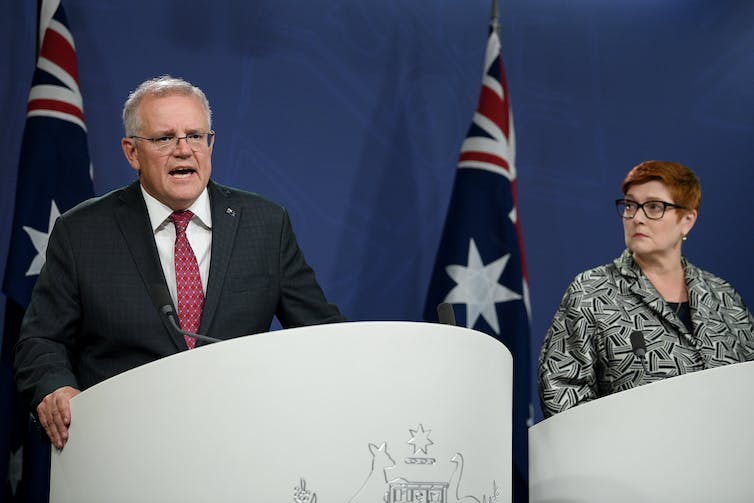 The federal government has suspended all flights from India until May 15. Dan Himbrechts/AAP

At an initial National Cabinet meeting, it was agreed the states would assume responsibility[24] for running quarantine. The public has no insight into the reason for this decision, with National Cabinet deliberations remaining secret. It is likely the Commonwealth lacked short-term capacity[25], having dismantled quarantine infrastructure over many decades.

But with little public understanding of the complexities of federalism, governments of all levels have deflected responsibility to one another. Labor governments and oppositions at state[26] and federal[27] level claim quarantine is a “federal constitutional responsibility”. The federal Coalition[28] claims responsibility lies with the states.

A need for leadership

As we move into the second year of travel bans, there are real questions about Australia’s longer-term strategy for facilitating essential travel in and out of the country — particularly for the 30% of Australians born overseas[29] with family and significant ties elsewhere.

Read more: Should Aussies stranded overseas go to the United Nations for help to get home?[30]

Within this are questions about how sustainable flight suspensions will be over coming years, with many developing countries unlikely to be vaccinated until 2024[31].

As the situation in India shows, there is a desperate need for leadership at both state and federal level to design systems that can facilitate essential travel until borders can safely reopen.

Unfortunately, this is unlikely to occur until voters insist political leaders step up.