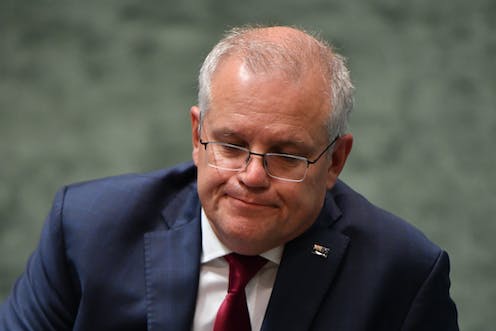 Scott Morrison has received a great deal of criticism over the government’s handling of then Liberal staffer Brittany Higgins’ allegation she was raped by a colleague in a minister’s office.

Now, if it’s possible, he faces an even worse situation, following the airing of an historical claim made by a woman – who last year took her own life – that she was allegedly raped by a man who is presently a member of the federal cabinet.

In an anonymous letter to Morrison, friends of the woman called for him to order an investigation.

The allegation relates back to 1988, years before the man entered parliament, when the woman was a teenager.

The call for action by Morrison draws on written and audio material left by the the woman, who also spoke to police. The letter included a statement written by her.

The ABC reported that on the eve of her death the woman, who had made her allegation to NSW police in early 2020, told the police she didn’t want to go ahead with the investigation.

After she died, the NSW police suspended their investigation.

Many people have been aware of the allegation for some time. Malcolm Turnbull has said the woman wrote to him and his wife Lucy in 2019. Labor’s Penny Wong said she heard of the allegation from the woman “when I ran into her in Adelaide in November 2019”. Both Turnbull and Wong encouraged her engagement with the police.

The story has been in the Parliament House rumour mill for months.

While such an allegation is obviously a matter for police – and Morrison has sent it there – that route faces a block because the alleged victim is dead.

But the suggestion that Morrison should order an investigation is fraught. The difficulties of such an inquiry are obvious, given the nature of the alleged crime and the fact the alleged victim has died.

The letter refers to a parliamentary investigation, but that would likely divide along party lines, and hardly be seen as independent. If there were some other form of inquiry, how would it operate and what would be its powers and processes?

Moreover, there is something troubling about having the government try to deal with a matter that so obviously should rest with the legal system.

Those urging an inquiry point to the handling by the High Court (and the government) of allegations of sexual harassment against former judge Dyson Heydon. In his case, however, there were women who could be questioned.

So Morrison is left with a minister subject to a most serious allegation – who must be accorded the presumption of innocence – but without a satisfactory path to a resolution.

The matter is unlikely to go away, especially given the present debate about the treatment of women.

Anthony Albanese danced around the issue on Sunday. He told the ABC the Prime Minister appointed the cabinet and he “must confirm to himself … that it’s appropriate for [the minister in question] to stay in his current position”.

Absolutely. But how this translates into a course of action, if the man denies the claim and there is no appropriate way of testing it, is unclear.

Morrison is certainly not asking the minister to stand down. The Prime Minister’s Office points to the statement of ministerial standards which says “ministers will be required to stand aside if charged with any criminal offence1”.

That line can be held while the minister’s name is not public. But one would think it is probably only a matter of time before the name is canvassed in a parliament under privilege.

If that happens, the situation would move into uncharted waters. But also probably towards an outcome.

As Denis Muller, from Melbourne University’s Centre for Advancing Journalism, says, this is “a situation best left to play itself out through the political process, because there’s nothing a prime ministerial-generated inquiry would yield that the political process will not eventually yield”.

Meanwhile on another front, the government has been dealt a blow with Liberal MP Nicolle Flint, who holds the highly marginal seat of Boothby in South Australia, announcing she will not contest the next election.

Flint, on the right of the party, has been relentlessly and personally targeted, with sexist attacks and the repeated defacement of her electorate office.

She has said of her experiences in the 2019 election, “This was a campaign to destroy me personally, a concerted attack to destroy me mentally”.

In a statement Morrison said, “The public attention from being a parliamentarian does sometimes attract unacceptable behaviour, and I have admired Nicolle’s efforts to stand against the bullying and nastiness of particular groups and individuals”.

With the debate of the last fortnight centred on the “toxic” culture in Parliament House, some of Flint’s experiences are a reminder that the toxicity stretches much more broadly than what goes on within the “Canberra bubble”.

Toxicity is infecting our politics and political discourse and behaviour generally. In particular, social media has boosted exponentially the amount of bile and enabled it to be disseminated far and fast. And even sections of the mainstream media have become forums for abuse and disrespect.