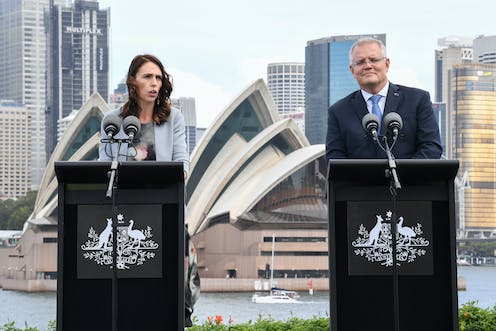 The recurring metaphor of New Zealand as “experiment” or “social laboratory[1]” might go back to the 1890s, but it continues to resonate in the 21st century.

Australian political journalist Laura Tingle[2] has revived the venerable idea in the latest edition of the Quarterly Essay[3], The High Road: What Australia can learn from New Zealand.

Her comparative historical narrative reveals uncanny parallels between the two countries — and significant divergences — with special attention to the recent history of neoliberal reforms, beginning in the 1980s, and then through to the post-global financial crisis and COVID-19 eras.

Time and perspective make all the difference, of course.

In the 1990s, for instance, when New Zealand was the global poster child for neoliberalism, Australia’s business lobbyists might have asked: why don’t we adopt the New Zealand model? Nowadays, the Australian left might look wistfully across the Tasman[4] and ask a similar question — for radically different reasons.

What Australians think they can learn from New Zealand, then, depends on the interests and values they stand for — and on the spin they put into retelling the histories of both countries. 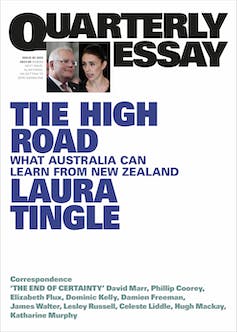 Good and bad lessons Although long, Tingle’s essay could hardly do justice to the sweep of history it covers. It’s a commendable effort all the same, with only a few inaccuracies. For example, she writes “there wasn’t any official British administrative presence in New Zealand […] until 1839”, overlooking the arrival of James Busby in 1833 as first British Resident[5]. But overall, Tingle’s trans-Tasman comparative political economy hits the right spots. Read more: With a mandate to govern New Zealand alone, Labour must now decide what it really stands for[6] She argues: “[T]he extent and speed of change in New Zealand [in the late 1980s and early 1990s], and the havoc it wreaked, would be impossible to defend from an Australian perspective.” And, indeed, New Zealand’s “radical industrial relations change [from 1991] has not provided any panacea” for its persistently low levels of productivity — nor for a widening income gap with Australia. In contrast, New Zealand’s Treaty of Waitangi[7] (1840) recognises Indigenous rights and provides constitutional backing for reconciliation and reparations. Its relevance has only grown, putting New Zealand well ahead of Australia in this respect, albeit with much work still to do. Growing apart At the turn of the 20th century, New Zealanders politely declined to join Australians in federation. The invitation is still open, in principle, but unlikely ever to be taken up. Neither side has any interest in completing that job. As both countries matured after the world wars, they tended to ignore one another, looking more to the UK, Europe and US as leaders and exemplars. This is despite the Closer Economic Relations CER[8] agreement (1983) and the many parallels in their political histories that Tingle points out. Read more: 'Courageous' investment means innovation stays in NZ, not sold off overseas[9] Regrettably, the two countries have continued to grow apart. The post-1984 nuclear-free policy[10] led to New Zealand being kicked out of the ANZUS[11] Treaty. Then, as immigration and security became serious issues, the then Australian prime minister, John Howard, unilaterally withdrew the (once reciprocal) social rights of Kiwis in Australia[12] (an event Tingle omits to mention). There was an accusation that New Zealanders were bludging off Australians in terms of both incomes and regional defence. Nowadays Australia deports its unwanted Kiwis with alacrity, which Prime Minister Jacinda Ardern pointedly described as “corrosive to our relationship[13]”. 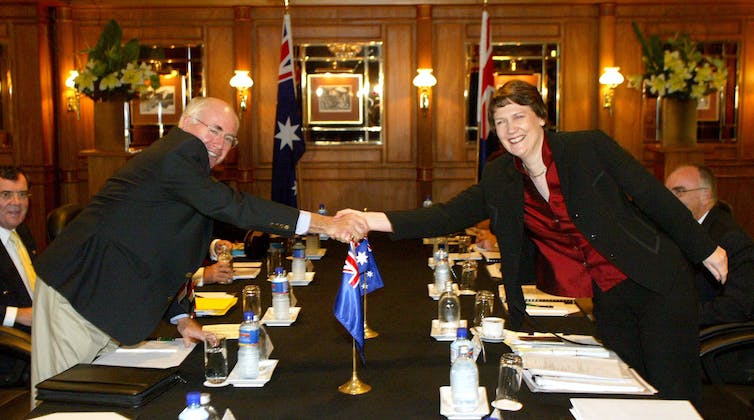 Raw deals: the then Australian and NZ prime ministers, John Howard and Helen Clark, shake hands before bilateral discussions in Auckland in 2005. AAP Trust in government Given that diplomatic corrosion, Australia probably won’t learn much from New Zealand. Nevertheless, the shared trauma of a global pandemic could bring the two countries closer again, especially once travel restrictions ease. Many Australians see the conduct of politics in New Zealand as more civil and mature. Ardern certainly burnishes that reputation, even though there is scepticism at home about her government’s actual performance. Tingle rightly points out that New Zealand’s proportional representation electoral system[14] encourages competition for that notional median voter. Hence there is convergence between major political parties, rather than polarisation. Kiwi politicians never know when they might need their opponents’ support. Read more: Who are Donald Trump’s supporters in New Zealand and what do we know about them?[15] Perhaps related to this, international comparative data indicate that people’s “dissatisfaction with democracy[16]” has grown alarmingly in Australia, the UK and the US — but not in New Zealand. Keeping dialogue open Being a small unitary state with a unicameral legislature, change is institutionally easier and swifter in Wellington than in Canberra. Because of this, New Zealand occasionally does something that makes Australians stop and think. For instance, Australia was once on the verge of adopting New Zealand’s universal no-fault model[17] of accident compensation. That fell through with the dismissal of the Whitlam government. But Australia’s federal constitution would have made implementation more complicated. Whether New Zealand is ever an example worth following is up to your political judgment. But Tingle’s essay is an important contribution to a maturing cross-Tasman dialogue that looks far beyond ANZAC jingoism and sporting rivalries. Still, both countries are divided over how to understand their own histories, let alone learn one another’s. And there will always be argument about whether and why Australia could learn anything at all from New Zealand, or vice versa. Tingle suggests paying closer attention to New Zealand — in the sense of it still being an experiment or a laboratory — and that seems to be all. If the Australian government were to reconsider its “corrosive” approach to the relationship, however, we might begin to see a more constructive sharing of ideas in both directions.