Earlier this month, the Morrison government introduced a bill[1] to parliament that would amend the Freedom of Information Act[2] to allow meetings of the National Cabinet to receive the same exemptions from releasing information to the public as the federal cabinet.

The protection would be considerable. The bill would expand the definition of “cabinet” in the act to include the National Cabinet or one of its committees, and would redefine “minister” to include state ministers.

The exemption would also cover not only National Cabinet meetings themselves, but a host of other bodies associated with it under the convoluted architecture for intergovernmental relations in Australia. This chart[3] shows just how confusing it gets.

The bill has been referred to a Senate committee[4], which is due to report on October 14. There is a lot at stake. The bill certainly should not pass in its present form.

Read more: The national cabinet's in and COAG's out. It's a fresh chance to put health issues on the agenda, but there are risks[5]

What’s this all about?

The bill is a response to the decision of the Administrative Appeals Tribunal (AAT) in a case[6] brought by Senator Rex Patrick to force the government to release certain National Cabinet records.

In that decision, the AAT rejected the government’s claim that National Cabinet documents were exempt from release under the Freedom of Information (FOI) Act. The tribunal did so on the basis that a forum in which heads of Australian governments meet is a completely different kind of body to a cabinet.

Read more: Nowhere to hide: the significance of national cabinet not being a cabinet[7]

A cabinet comprises ministers in the same government, who are elected to the same parliament, to which they are accountable and collectively responsible.

By contrast, a meeting of National Cabinet comprises the leaders of nine separate jurisdictions, with cabinets, parliaments and lines of accountability of their own.

The government decided not to appeal the AAT decision, but has moved to amend the FOI Act instead.

There have been meetings of heads of Australian governments since before federation. For around 100 years, these were known as the premiers’ conference. In 1992, the name was changed to the Council of Australian Governments[8], or COAG.

COAG today has ceased to exist — National Cabinet has replaced it[9]. It is, however, essentially the same body with a new name and some altered procedures to respond to the pandemic. 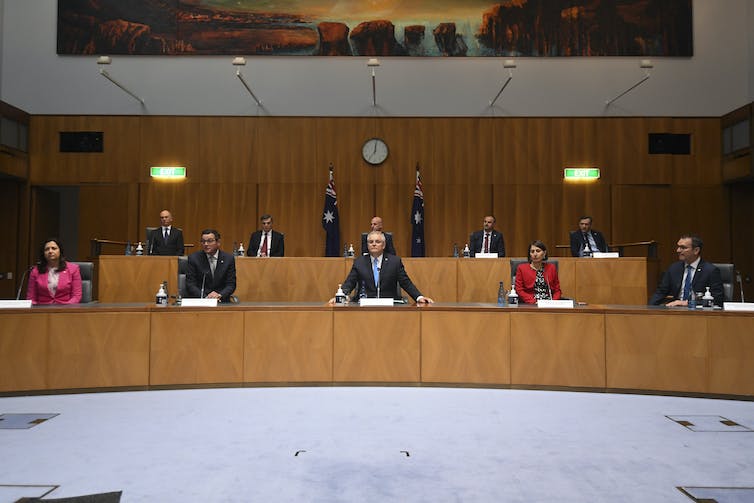 What the current bill would do

None of these bodies was set up by legislation. Over the almost 30 years of its existence, however, COAG came to be mentioned in passing in a lot of legislation dealing with federal, state and territory government relations.

This explains the title of the current bill: the COAG Legislation Amendment Bill[10].

Interestingly, the first two sections of the bill (“schedule one” and “schedule two”) amend a host of acts referring to the old name, COAG. None of the amendments, however, uses “National Cabinet” as a substitute. Instead, for example, the COAG Reform Fund would become the Federation Reform Fund and references to COAG alone would become First Ministers’ Council.

Against this background, the amendments in schedule three to the FOI Act — and many other acts — seem even more peculiar.

Here, National Cabinet is referred to by name, and the amendments define the federal cabinet to include “the committee known as the National Cabinet”. This begs the question: known by whom? If the answer lies in the terminology used by the prime minister, what other bodies might this bill ultimately cover?

How confidential should National Cabinet be?

The bill raises an important question of the extent to which decisions of National Cabinet should be available to parliaments, the media and the public.

The need for transparency and accessibility is pressing. Over the course of the pandemic, the National Cabinet has made a host of significant decisions about how public power will be exercised, when and by whom. Its decisions have dramatically affected the lives of all Australians for almost two years.

In many ways, the National Cabinet’s effectiveness relies on public cooperation and trust. The only publicly available information about its decisions, however, comes through bland press releases, discursive remarks at Prime Minister Scott Morrison’s press conferences, and the occasional leak to selected journalists.

The lack of public knowledge about what goes on in National Cabinet cuts across all the principles and practices of representative democracy — at the Commonwealth level and in each of the states and territories.

There may well be a case for keeping some aspects of what goes on in National Cabinet confidential. The decisions are difficult and negotiations may be tense. Outcomes are sometimes unpredictable and public opinion can be febrile. It’s also in the public interest to encourage frank exchanges between political leaders and innovative thinking about solutions.

These considerations suggest there may be a case for the confidentiality of some aspects of the National Cabinet and preliminary working documents.

There is no comparable rationale, however, for withholding information about the decisions that have been made, any finalised documents on which they are based and understandings about the action expected to be taken.

These matters would be exempt under the bill. They should be in the public domain.

By enshrining the words “National Cabinet” in legislation, the bill also entrenches the foolish and inappropriate name that was adopted without apparent deliberation as the pandemic began to unfold.

One is federalism. It is bizarre to describe the meeting of heads of Australian government as a subcommittee of the cabinet of one of its members (the federal government).

This could be destructive to healthy relations between federal, state and territory governments in the future.

The second risk is to the idea of a “cabinet” itself — and, by extension, responsible government.

The concept of a cabinet is hard enough for people to understand. It depends almost entirely on constitutional convention, reinforced by the logic of the relationship between government and parliament.

No doubt the frequency with which the term is used gives observers some general understanding of what a cabinet does. But if the understanding is muddled by applying the term “cabinet” to a body of an entirely different kind, the potential for confusion is magnified.

This comes with considerable loss to our democracy, and no gain.