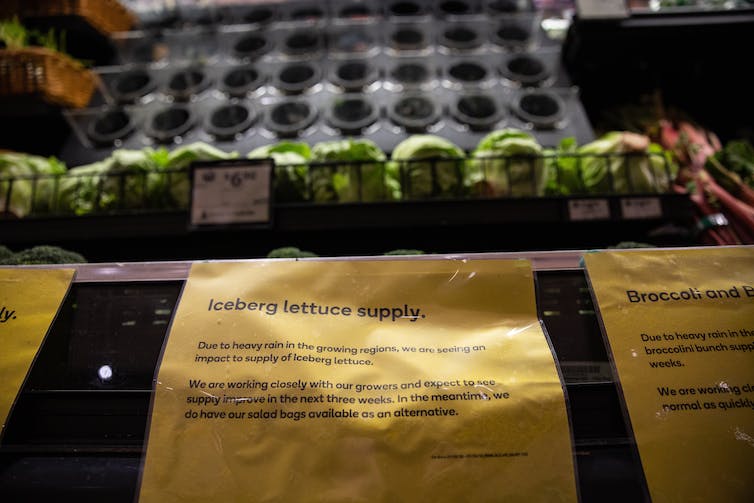 Australian shoppers are facing a crisis in the fresh-food aisles.

That’s if you can even find such produce. Supermarket shelves for leafy greens are often bare.

This is a strong hint as to why prices have risen so much. As well as growers facing higher input costs – in line with pressures pushing up food prices globally – these price hikes are being driven by lack of supply – with crops and stores[6] wiped out by rain and floods in eastern Australia.

Read more: Why is lettuce so expensive? Costs have shot up, and won't return to where they were[7]

The price hikes have led to calls for supermarkets to impose price caps[8] to ensure shoppers can still afford to feed their families healthy food.

But price ceilings on goods or services rarely, if ever, work. Prices play an important role in allocating resources efficiently. They send a signal to both customers and suppliers. To arbitrarily reduce prices would only increase shortages – both now and in the longer term.

British economist Alfred Marshall was the first to illustrate the interaction of these two laws graphically, in his 1890 book Principles of Economics[9]. Market equilibrium (balance) occurs at the price and quantity where demand equals supply.

Wikimedia Commons, CC BY[10][11] If the quantity supplied falls, the market response is for prices to rise, achieving a new equilibrium. If the quantity supplied falls but prices remain the same, demand will outstrip supply, leading to shortages. Fresh fruit and vegetables are particularly prone to significant price fluctuations because they are perishable and cannot be easily stored for a long time. This why seasonal price fluctuations are common. Higher prices provide a signal both to consumers and producers. They tell consumers to buy less and switch to alternatives. They provide an incentive for producers to grow more – though this process is fairly slow given the time needed to grow and harvest fruit and vegetables. But eventually, if the market is left to its own devices, prices will eventually return to “normal”, consistent with historical prices. Capping the price, on the other hand, will benefit those lucky enough to grab supplies when they available. But it will likely reduce supply even further, by affecting the decision of producers unwilling to supply at below-market prices. It could also lead to a “black market”, with some customers sourcing supplies by other means at higher uncapped prices. Evidence from rent controls The economic theory of price caps is well supported by empirical evidence. The best-known involve rent controls, which are used in US cities such as New York City and Los Angeles, and in European cities[12] such as Stockholm, Berlin and Dublin.

New York City’s rent controls are world famous – but not to be emulated. Shutterstock

Rent controls mean some are lucky enough to find an affordable apartment. Many others miss out – or engage in “deals” with landlords to get around the controls. The most disadvantaged tend to lose out most since landlords can discriminate in favour of what they consider the “more desirable” tenants.

While rent control appears to help current tenants in the short run, in the long run it decreases affordability, fuels gentrification, and creates negative spillovers on the surrounding neighborhood.

As with housing, so too with broccoli and cabbage.

Read more: Why the NZ government is right to rule out rent controls as a housing crisis solution[14]

We’ve seen this all before

So generally price caps are to be avoided.

If there are suspicions of wholesalers or retailers exploiting shortages, this is best handled by the Australian Consumer and Competition Commission. Though “price gouging” is generally not illegal[15], the consumer watchdog can prosecute companies for makes misleading claims about the reasons for price increases and for unconscionable conduct (in the case of extreme gouging for an essential good).

What else can be done? Only what consumers have always done, which is to substitute relatively cheaper goods for those becoming more expensive.

These high prices for lettuce and such now may be a shock, but they are not a sign of market failure requiring intervention. If we let the market do its thing, shortages will end and prices return to “normal” – at least until the next natural disaster.