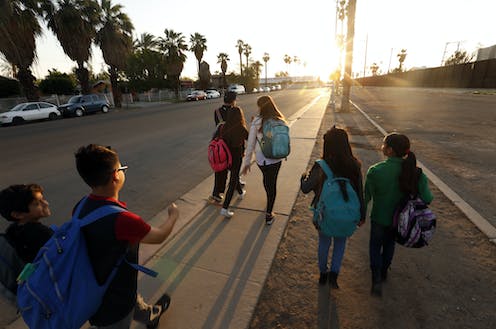 The Research Brief[1] is a short take about interesting academic work.

Latino adults who obtain a higher level of education than their parents are less likely to have Type 2 diabetes than those who obtain the same educational level or lower. Those are the findings of our peer-reviewed research[2] published in the Annals of Epidemiology.

Using a linked dataset of parents and children from the Sacramento area of California, we tracked how education over generations relates to health. The majority of the Latino families reported being of Mexican heritage. Most of the parents came to the U.S. as adults and either brought their young children with them or had their children in the U.S. later.

We examined 608 adult children to assess the presence of prediabetes and diabetes, and we linked them to 399 of their parents. Some parents were linked to more than one adult child.

And adult children who were upwardly mobile in terms of educational attainment were 61% less likely to have diabetes than if both they and their parent had achieved a lower or similar level of education as their peers.

Nationally, Mexican Americans have relatively low levels of formal education[3] and a high burden of diabetes[4] when compared with other racial and ethnic groups.

Data from the 2019 U.S. Current Population Survey show that among adults 25 years or older, 14% of Mexican Americans[5] had obtained a bachelor’s degree or more, versus 40% of non-Hispanic white Americans[6]. Similar trends are seen when taking birthplace and age into account.

For example, data from the National Health and Interview Survey from 1989 to 2005 shows persistent gaps[7] between the average years of education achieved by Mexican Americans and by non-Hispanic white Americans. For those born in the U.S. in the 1940s or after, the gap between the two groups was two years. For those born abroad during the same time, the gap was five years or more.

Although we saw strong differences in the burden of diabetes measured at one point in time, we don’t know if education is directly responsible for this observed health benefit. It may be that higher education is a gateway to better health care, housing, nutrition or physical activity.