Should Australia recognise a Taliban government in Afghanistan? This is a question the federal government has been facing ever since the government of Afghan Prime Minister Ashraf Ghani capitulated to the Taliban on August 15.

Since that time, various Australian government ministers[1] have avoided media questions on this sensitive topic. This week, an interim government was announced[2] in Kabul, so the question has become more pressing.

It is clear the United States, the United Kingdom and others have been in talks with the Taliban in recent weeks. The US’s co-ordinated withdrawal from Kabul could not have taken place without some level of Taliban co-operation. There has already been de facto engagement with the Taliban and a recognition they are now in charge.

Australia will support international efforts to maintain pressure on the Taliban and on any future Afghan administration to meet its responsibilities to its people, its region and the wider world.

Read more: The Taliban wants the world's trust. To achieve this, it will need to make some difficult choices[4]

The 1933 Montevideo Convention[5] has a test for the recognition of a new state. There must be settled boundaries, a defined population, a government and a capacity to enter into international relations.

Australia applied the test to Timor-Leste, for example. Australia was one of the first countries to formally recognise Timor and even signed a maritime boundary treaty in Dili on independence day in May 2002[6]. In that instance, Timor was clearly emerging as a newly formed state from its previous existence as a Portuguese colony and then Indonesian province.

Even if the Taliban proclaims a new name for the country such as the “Islamic Emirate of Afghanistan[7]”, that does not make Afghanistan a new state for international law purposes. After all, countries changing their names is not exceptional. They also regularly change governments.

In 2021, Australia has faced changes in government in Myanmar and the United States. In the case of Myanmar, Australia expressed its displeasure with the February military coup, but has proceeded to deal with the current military government. Official congratulations were passed on to the Biden administration and business as usual has carried on with Washington. 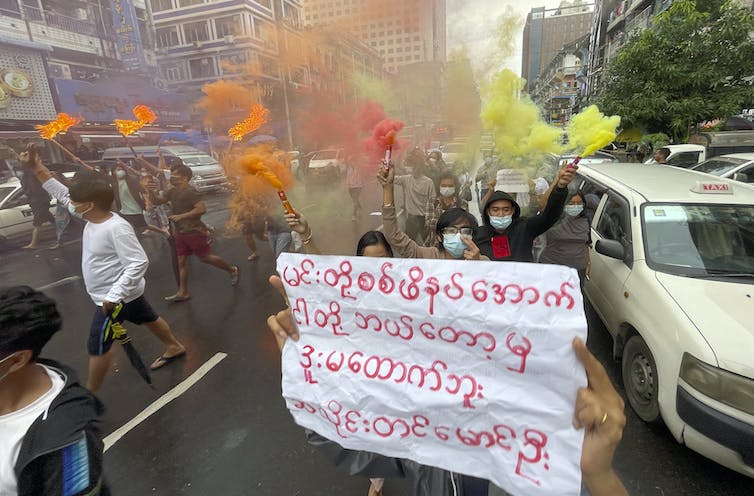 Despite a military coup in Myanmar, the Australian government has continued to deal with its new rulers. Lynn Bo Bo/EPA/AAP

Why, then, is the question being asked as to whether Australia and other western governments will recognise a Taliban government in Afghanistan? First, the Taliban’s previous rule from 1996-2001 was characterised by its ruthlessness in seeking to enforce sharia law, and widespread human rights violations, especially against women.

That regime’s legacy is a legitimate concern for Afghan women[8], foreign governments and multiple human rights organisations that are fearful it will be repeated again.

Second, Australia, the US and their western allies devoted considerable military resources to overthrowing the Taliban following the September 11 2001 terror attacks. For Australia and others, the Taliban had effectively lost their right to govern following their support for, and harbouring of, Osama bin Laden.

Read more: Explainer: what is shariah law and what version of it is the Taliban likely to implement?[9]

With the looming 20th anniversary of the September 11 attacks at the forefront of public consciousness, especially following the very public decision of the Biden administration to end the so-called “forever war[10]”, there is understandable caution in hastily recognising a Taliban government.

How then will Australia act? Canberra will not wish to take the lead in this matter. There may even be a co-ordinated strategy by certain western countries.

UK Prime Minister Boris Johnson has suggested any recognition of the Taliban may be conditional[11]. The formation of a stable government will be the first priority. Other conditions could include a clear and verifiable commitment to human rights, especially respect for women’s rights, and the ability of Afghans and other citizens to freely leave the country.

A period of initial de facto recognition of the Taliban is probable, which could over time give way to formal recognition.

Australia will need to have a clear policy framework to deal with these dynamics. For better or worse, Australia has been intimately connected with Afghanistan’s future now for 20 years. The ongoing Australian government investigation[12] into alleged war crimes in Afghanistan by Australian Defence Force personnel will keep that relationship in the public eye for years to come.

To ensure those war crimes investigations and the associated in-country gathering of legally admissible evidence is not jeopardised, Australia will need to learn eventually to work with whichever government oversees Afghanistan from Kabul.

At present, that is the Taliban.