Australia’s leading economists back them.

Of the 60 leading economists surveyed by the Economic Society ahead of the budget, more than 60% wanted stimulus until the unemployment rate was below 5%.

One in five economists wanted stimulus until the rate was below 4%[1]. Five wanted a rate below 3%. 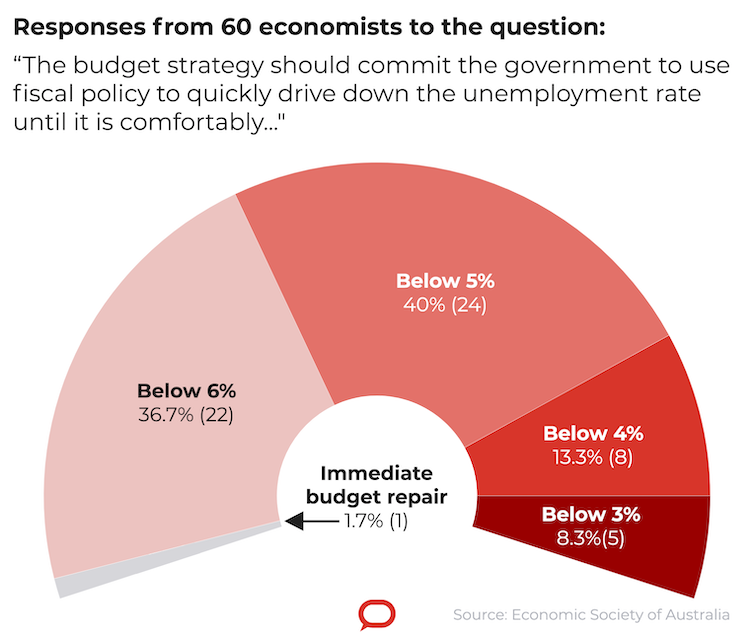 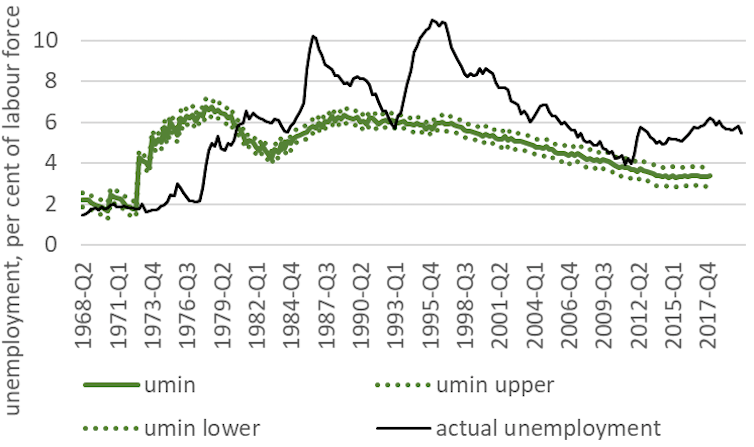 umin is the minimum rate of unemployment consistent with non-increasing inflation. Upper and lower estimates = 95% confidence level. Taken together, our series of estimates suggest that since 2012 we could have achieved much lower unemployment than we have without troubling inflation. Whether umin has edged higher or lower since our most recent estimate in 2017 depends in part on the size of subsequent changes in union power and unemployment benefits. An advantage of our estimates is that they help explain why umin has varied over time. By contrast, the Reserve Bank and Treasury estimates shed no light on causes. They derive from statistical relationships between unemployment and wages which have changed over time without an explanation of why tat has happened. Read more: Economy will be weak and in need of support after pandemic, say top economists in 2021-22 survey[8] Our estimates quantify the impacts of union power and unemployment benefits. In 1975, when 51% of the workforce was unionised and unemployment benefits were as high as 28% of male after-tax average earnings, we estimate umin at 5.7%. Since then union membership has fallen to 17%, and unemployment benefits have fallen to 23% of male after-tax earnings. One or both of them would need to fall further to get umin down to the 2% we used to have. We can reach 3.3% but perhaps not 2% When umin was 2% between 1967 and 1971 unemployment benefits were lower than they are today, averaging 14.7% of male after-tax average earnings. Our estimates suggest that with union membership where it is today, unemployment benefits would need to fall a further 5 percentage points (from 23% to 18% of male after-tax earnings) to get umin back down to 2%. It is important to realise that cutting umin would not automatically cut the rate of unemployment to umin. Read more: Josh Frydenberg has the opportunity to transform Australia, permanently lowering unemployment[9] The government would need to stimulate the economy in order to get it there, as it now says it is willing to do[10]. The gains to well-being of cutting unemployment to umin are substantial, especially for those at the end of the job queue and new entrants to the labour force, such as young people. Our calculations suggest there is little to be lost from trying to achieve them. But it would be wise to tread carefully. Jeff Borland of Melbourne University laid out a reasonable approach in his response to the Economic Society survey[11]. He said if we get the unemployment rate down to 4% and find that inflationary pressures are not present, we should “try to push lower”.