That money split is symptomatic of a general focus on the impact of natural disasters – thinking about their costs in terms of direct damage to the built environment.

Lost homes and infrastructure, of course, do need to be replaced; and insurance claims do provide a neat way to calculate a tangible cost to a fire or flood.

But just because insurance numbers are solid and straightforward, we shouldn’t ignore that disasters have broader flow-on economic impacts that can’t really be insured against.

A farmer might be able to claim for a crop lost directly in flood, for example, but how to insure against the decline in output the next year?

And what insurance policy can protect the lowest paid or women from having their average incomes in disaster-affected being suppressed for up to five years?

Read more: Natural disasters are affecting some of Australia's most disadvantaged communities[1]

To investigate the impact of natural disasters, I and colleagues from Curtin University, the University of Melbourne’s Centre for Disaster Management and Public Safety, and Ghent University in Belgium analysed data[2] for 47 major floods and 36 major bushfires in Australia from 1978 to 2014.

This research used data by economic sector from the Australian Bureau of Statistics. The bureau divides the economy into 18 industry sectors[3]. We focused on the ten most relevant: agriculture; construction; mining; manufacturing; recreation; retail; real estate and financial services; transport, storage and communications; utilities (electricity, gas, water and waste); and the public sector.

Beginning with state-level data on the total value of goods and services of each sector, we then used statistical techniques to estimate how much, on average, floods and bush fires changed these values in the disaster year and the following year.

Floods do the most damage

Floods had the most far-reaching effects. On average, a typical major flood in our study reduced a state’s output in the following sectors in both the year of the disaster and the subsequent year. The effects over the two years (compared to other states that did not have a disaster) were:

Little effect was detected for manufacturing.

The finding on agriculture, in particular, might seem counter-intuitive. It is likely due to fires mostly affecting forested areas and the fire season being in summer, when most crops have already been harvested.

Somewhat surprisingly, fires had no notable effect on recreation, utilities or public sector and emergency management outputs in the sectoral data.

The only sector showing an increase in output was wholesale/retail trade. This increased an average 7.68%. 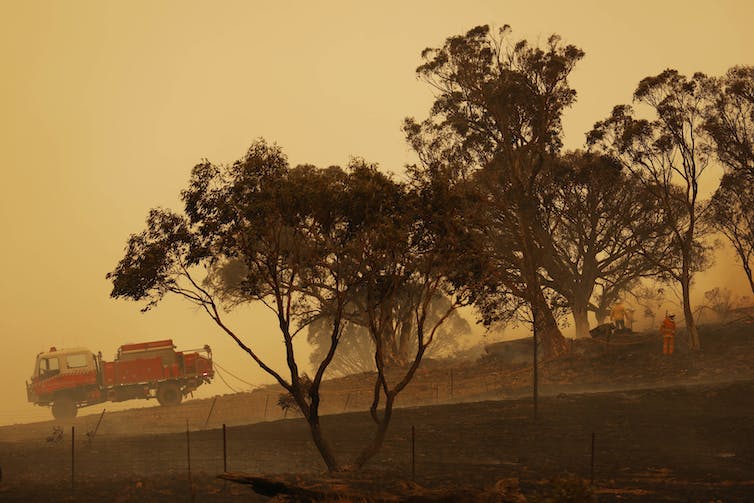 Bushfires have quite different economic impacts to floods. Sean Davey/AAP

Another way to measure the lingering and less obvious economic effects of disasters is through changes in individual incomes.

In different research[4] using Australian census data from 2006, 2011 and 2016, we have found incomes can be suppressed for many years after a disaster.

Following Victoria’s 2009 Black Saturday bushfires, for example, we found the average annual incomes for agricultural workers in fire-ravaged areas was $8,000 lower over the following two years. For workers in accommodation and food services, the average income was $4,600 lower for two years.

For some groups, lower incomes persisted far longer. The average income for women in areas affected by the Black Saturday fires was $2,500-$3,000 lower until at least 2016 – the limit of our study. (We found no change in average incomes for men).

Accounting for all costs

With the frequency and severity of natural disasters predicted to increase, the economic flow-on effects will also increase.

Understanding their full economic impacts and accounting for all their social costs[6]– is crucial to ensure policies help the sectors and groups who need it most. We need mitigation. We need resilience. We also need to do what we can on prevention, through supporting international efforts to limit the drivers of more extreme weather events.

This story is part of a series The Conversation is running on the nexus between disaster, disadvantage and resilience. You can read the rest of the stories here[7].

Authors: Mehmet Ulubasoglu, Professor of Economics, Head of the Department of Economics and Director of the Centre for Energy, the Environment and Natural Disasters, Deakin University